The Belgium National Committee aims to promote sustainable energy development in Belgium, as a part of the World Energy Council's energy vision. As a member of the World Energy Council network, the organisation is committed to representing the Belgian perspective within national, regional and global energy debates. The committee includes a variety of members to ensure that the diverse energy interests of Belgium are appropriately represented. Members of the committee are invited to attend high-level events, participate in energy-focused study groups, contribute to technical research and be a part of the global energy dialogue.

William D’haeseleer is Full Professor in the Faculty of Engineering of the University of Leuven (KU Leuven), Belgium. He teaches courses in the domain of Energy Technology & Management (Thermodynamics, Nuclear Energy, Thermal Systems, Renewable Energy). His research is mainly situated in the areas of Energy Conservation & Energy Management, Energy & Environment, Energy Systems, and Energy Policy. He is Director of the KU Leuven Energy Institute. W. D’haeseleer graduated as Electro-Mechanical Engineer (option Energy; 5y program – “Diplom-Ingenieur”) and MS in Nuclear Science & Engineering from the KU Leuven in 1980 and 1982, respectively. In December 1983, he obtained another MS degree in Electrical Engineering (Plasma Physics) from the University of Wisconsin-Madison (UW-M), USA. He received his Doctoral Degree (PhD) from the UW-M in May 1988. From 1988 till 1993, he resided in Germany, at the Max-Planck-Institut für Plasmaphysik in Garching-bei-München, after which he was active in the Belgian engineering consulting company Tractebel Engineering. As of 1996, he holds a full professorship at the KU Leuven. He has been a Fulbright Fellow and is an elected member of the Royal Academy of the Sciences and the Arts of Belgium (KVAB). 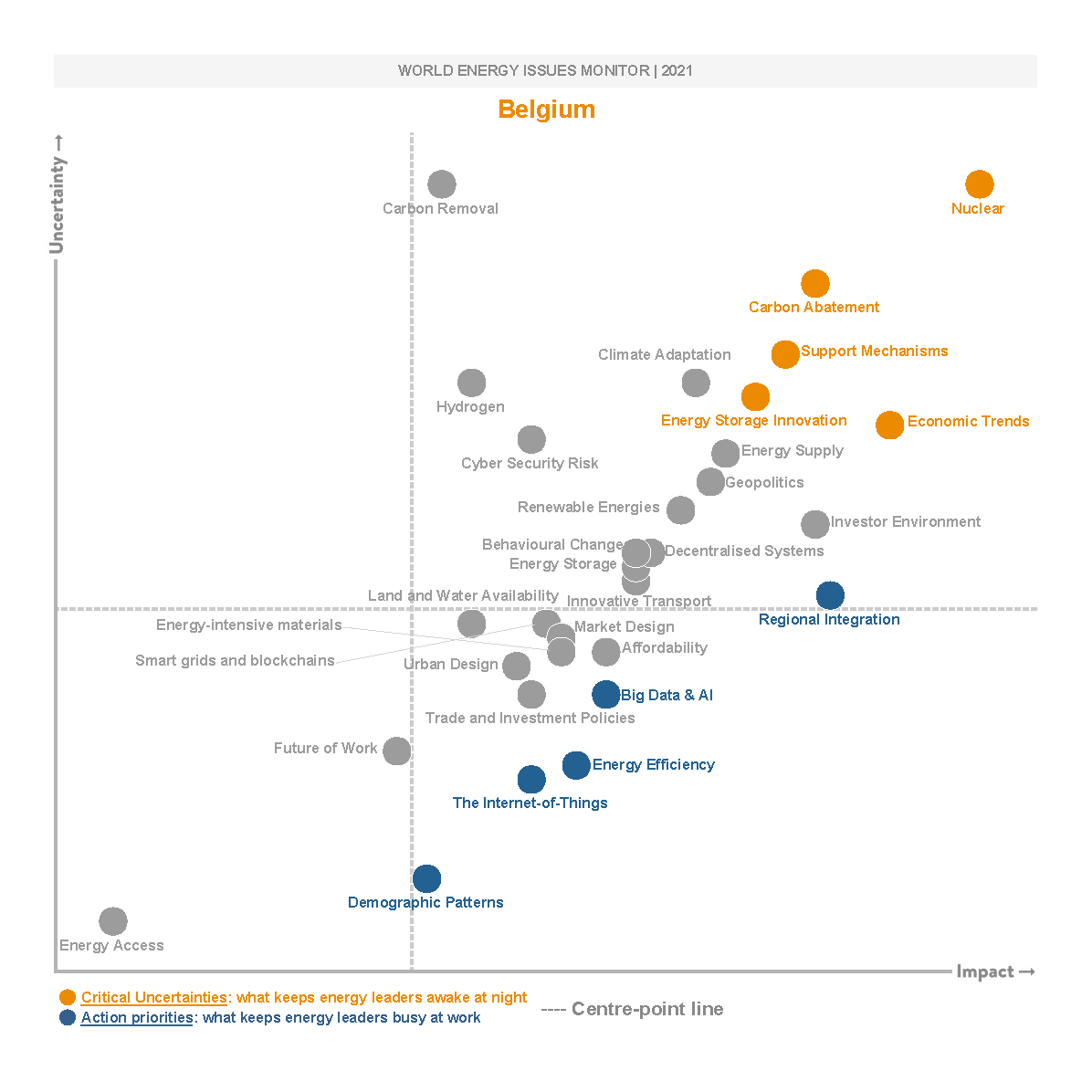 Comparing 2019 and 2020 results, Belgium’s energy leaders continue to pay attention to Macroeconomic Risks such as Climate Framework and Energy Geopolitics such as EU Cohesion, Middle East Dynamics and China. The Policies and Business Environment are seen as less uncertain and join the Action Priority section together with Energy Technologies.

EU Cohesion continues to be perceived as a Critical Uncertainty. The future of the EU amid continued uncertainty over a Brexit timetable is of particular concern to Belgium. A gas pipeline connects the UK and Belgium and an electricity interconnector was completed in December 2018. Still, uncertainty over Brexit led to the cancellation of the first capacity auction for the interconnection in March 2019.

Climate Framework is another Critical Uncertainty in view of the decision to phase out nuclear power by 2025. In 2018 nuclear energy accounted for 39% of Belgium’s total net electricity production and will have to be replaced. The main contributors to GHG emissions in the industrial sector are electricity and heat production and oil refining. However, overall, GHG emissions in Belgium have declined as the economy has become less energy intensive (Integrated National Energy & Climate Plan 2021-2030).

Market Design is seen with reduced uncertainty and becomes an Action Priority. As the deadline for phasing out nuclear power by 2025 looms, the shift requires increased market flexibility to diversify the energy mix and provide affordable and secure energy supply. Storage solutions, smart meters and demand management across the distribution network are being worked on within a regulatory framework. The option of importing hydrogen or methane is also being considered.

Renewable Energies continue to be seen as an Action Priority, as low carbon sources are being integrated as a diversification strategy as nuclear is phased out. Under Belgium’s National Energy Plan, the share of renewables is set to rise to 18.4% by 2030, much of it from offshore wind and advanced biofuels. At the end of 2017, renewable energies accounted for 8.65% of the country’s final energy consumption.

Energy Efficiency is seen with increased impact and becomes an Action Priority, in alignment with efforts to reduce dependence on imported fuels. Belgium is actively working on replacing low calorific gas supplies from the Netherlands and has developed a conversion plan to switch to high calorific gas.

The position of most energy issues in this year’s map does not come as a surprise, except perhaps the perception around the Nuclear issue, which is expected to have an impact “without uncertainty”. This may come as an unexpected result, since there is still a large uncertainty as to the effective date of a complete phase out (note that in “normal years”, more than half of the Belgian electricity is generated by nuclear means). The position of nuclear in the map is therefore to be interpreted that the respondents are certain that the “yes-or-no” nuclear phase out will definitely have an impact. 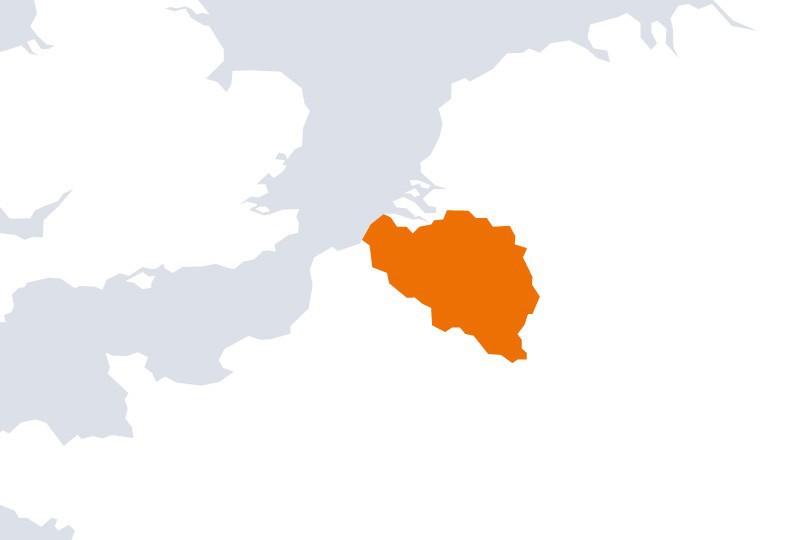 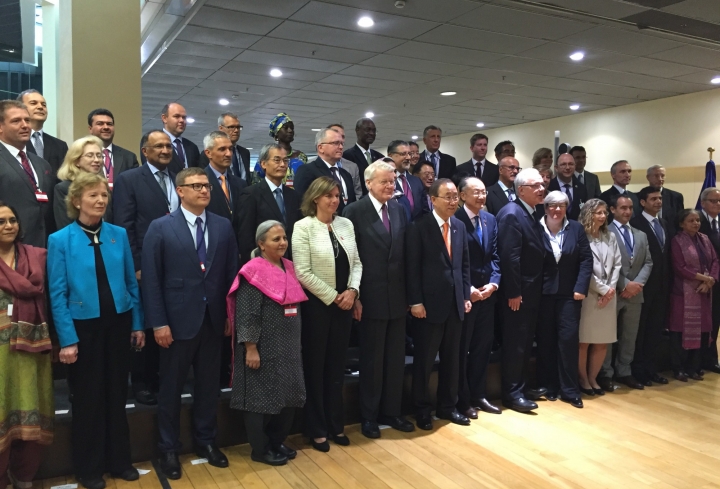