In Response to the COVID-19 Pandemic

As the COVID-19 pandemic continues to impact every corner of the world, pulling together as a community of deep expertise has never been more important - to share experiences and lessons learned, and better prepare for and shape what comes next. Our role as a credible, responsible and impartial value-adding “global voice” for whole energy system movement has never been more critical.

The Kingdom of eSwatini National Committee aims to promote sustainable energy development in eSwatini, as a part of the World Energy Council’s energy vision. As a member of the World Energy Council network, the organisation is committed to representing the eSwatini national perspective within national, regional and global energy debates. The committee includes a variety of members to ensure that the diverse energy interests of eSwatini are appropriately represented. Members of the committee are invited to attend high-level events, participate in energy-focused study groups, contribute to technical research and be a part of the global energy dialogue. 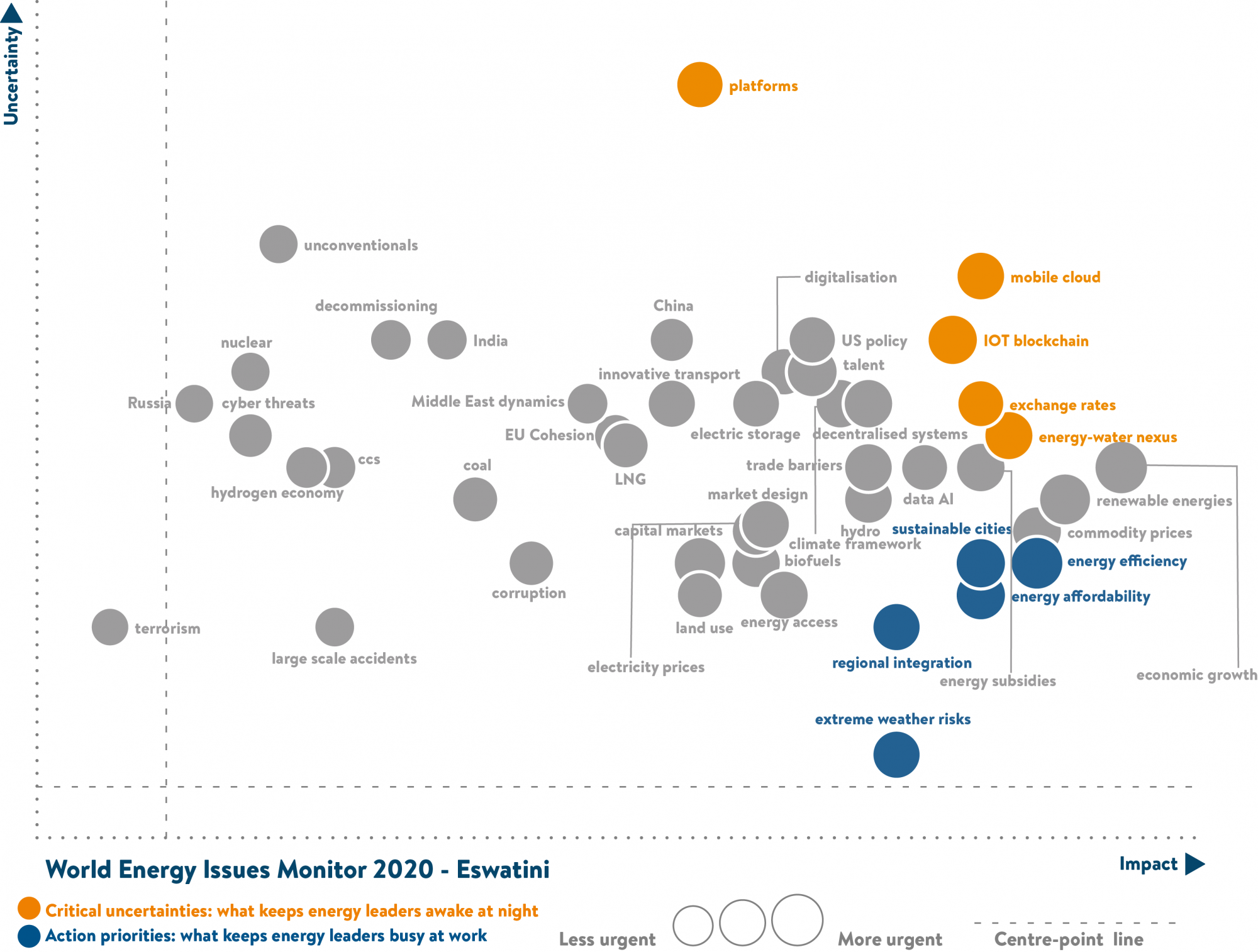 Eswatini’s energy leaders see digitalisation issues (including Platforms, Mobile Cloud and IoT/ Blockchain) as those with highest uncertainty and impact. Exchange Rates and the Energy-Water Nexus are also considered issues of uncertainty. On the Action Priorities section, Extreme Weather risks are perceived with the lowest uncertainty. Energy Efficiency, Affordability and Regional Integration are additional Action Priorities.

IoT/Blockchain is among the key digitalisation issues in Eswatini’s Uncertainties section. The role of ICT in all business operations is becoming an increasingly important factor, raising the nature and sophistication of all transactions. The ICT sector, however, is advancing faster than the energy sector, which calls for investment in capacity building and energy systems as well as protection from cyber-attacks.

Exchange Rates are also seen as high uncertainty and high impact issues as Eswatini is a net importer of energy (petroleum and electricity). These perceptions reflect worries about oil and electricity prices that affect energy affordability and security of supply in the country. Monitoring commodity price movements is a government priority.

Energy-Water Nexus is seen as a Critical Uncertainty. Eswatini has an agriculture-based economy and energy is also part of the five pillars outlined in the country’s strategic road map for 2023. Hydro is currently the main source of local electricity generation and competes with agricultural irrigation for supply from the country’s main dams. The 2016 droughts presented challenges in balancing the needs for potable water consumption, irrigation and electricity generation.

Extreme Weather Risks are perceived with low uncertainty and high impact. The country faces the dual challenge of heavy storms and drought. It has launched its first solar projects to lessen reliance on hydro power, with the auctioning of 40MW of solar PV and the development of 10MW solar capacity by the Eswatini Electricity Company. The procurement of additional 40MW biomass power plants will follow completion of the solar PV project. After this, other technologies will be considered in line with the Energy Masterplan.

Energy Efficiency is a key Action Priority. Eswatini has recently completed its Energy Efficiency Policy and is finalising the implementation strategy. As the country is a net importer of energy, it is engaged in extensive efforts to ensure security of energy supply while remaining mindful of cost implications. As the final cost of power increases, the government is aware of the need to make energy efficiency part of the country’s priorities within industry and households.

Regional Integration is also seen as an Action Priority. Because Eswatini is a landlocked country, it is highly dependent on neighbouring countries to access regional and international markets including the Southern African Power Pool (SAPP). Mozambique is rich in natural gas and South Africa has abundant electricity supply. This puts regional integration issues high on the country’s agenda. Eswatini is also exploring the potential for an inter-regional natural gas pipeline and related services projects in partnership with South Africa and Mozambique. 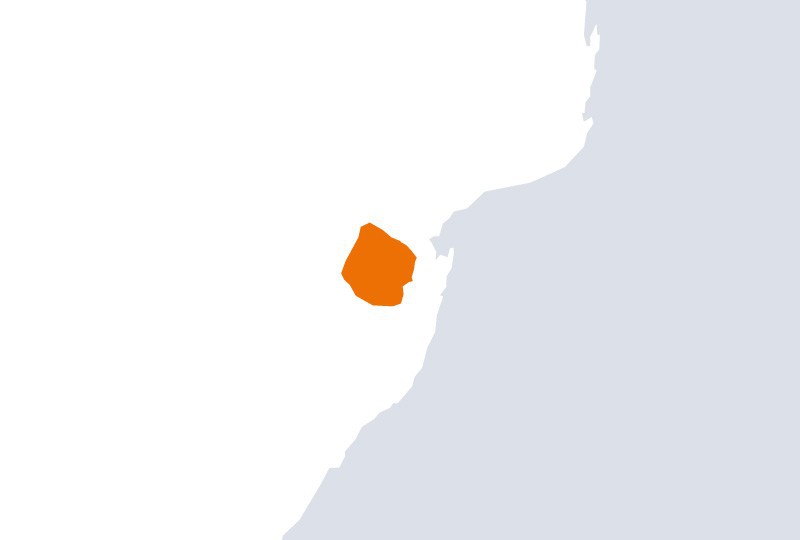 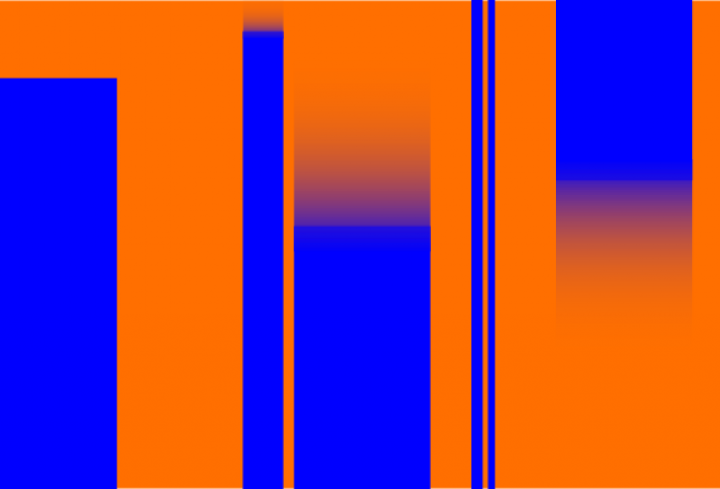 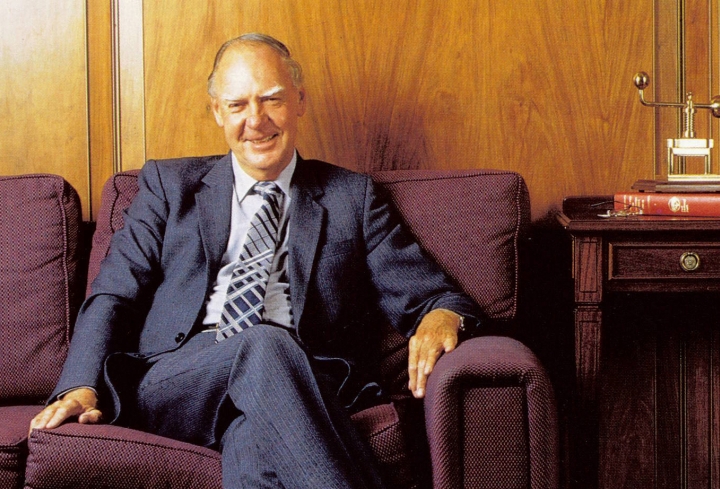 Save the date! @StartUpGET has announced a fully online version of the #SET Tech Festival & Award Ceremony supporti… twitter.com/i/web/status/1…

Register now to join industry leaders next Friday, 14 August, for a discussion on the future of electricity grids i… twitter.com/i/web/status/1…