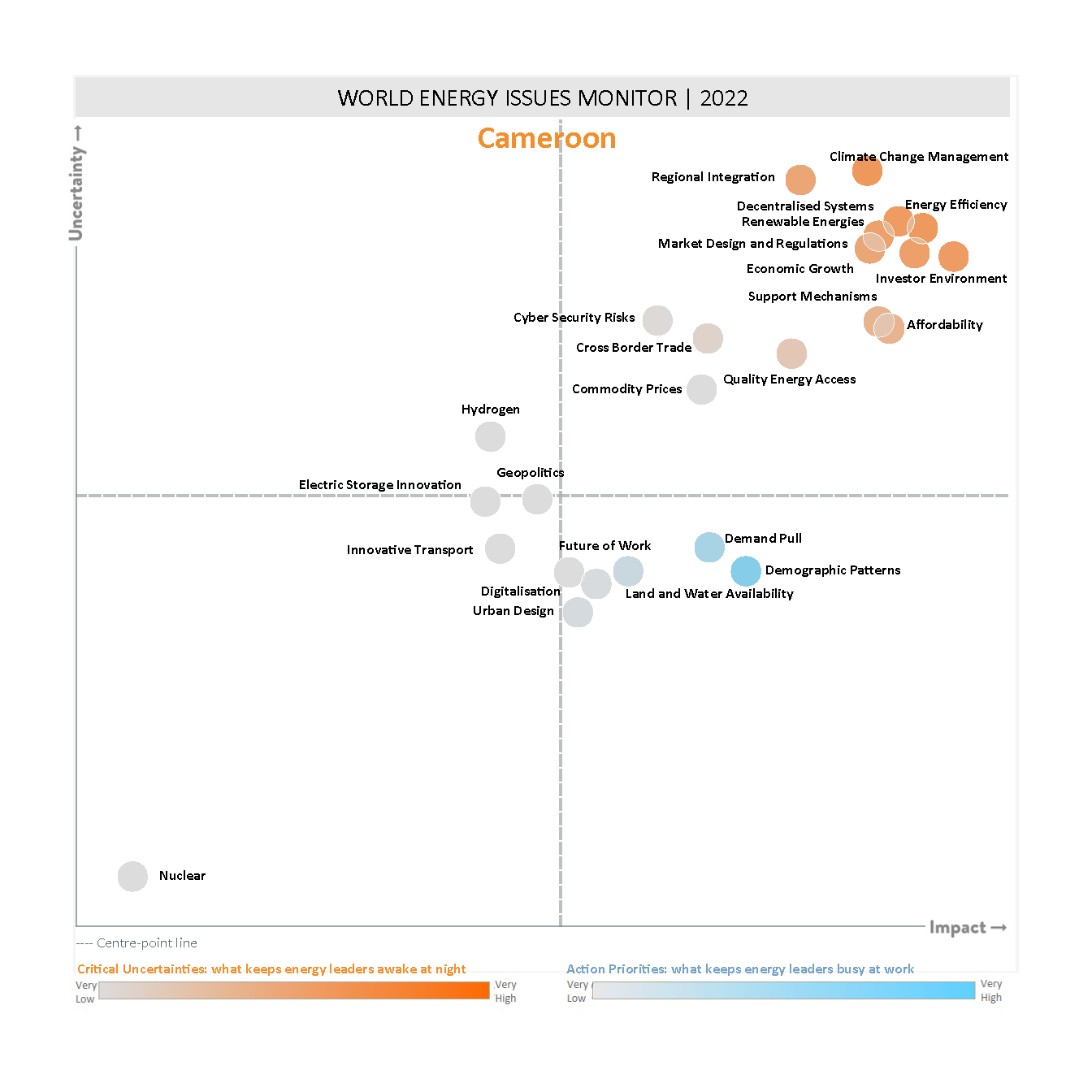 Due to the strong diversification of its economy, Cameroon has a certain economic stability whose resilience has not yet been significantly shaken by either the socio-political crisis that has been averted in the Anglophone part of the country since 2016 or by the COVID-19 pandemic. Investments in the energy sector have an important role to play in enabling the nation to attain emergence by 2035, with focus on electricity generation from renewables such as hydroelectric as part of the country’s commitment to the Paris Climate Agreement.

In terms of critical uncertainties, energy leaders in Cameroon are highly concerned with climate change management, and this is understandable in the light of the ongoing “National Climate Change Adaptation Plan” that provides a framework to guide the coordination and implementation of climate change adaptation initiatives in Cameroon. Energy efficiency remains an area of uncertainty, with much debate over the structure of the electricity transmission and distribution network, which is the source of significant energy losses. This brings back the debate over the country’s power system for which the decentralisation is thought by experts as the best alternative to promote access to modern energy services in remote communities. From this perspective, the ten-year Cameroon Government’s development strategy adopted in 2009 had emphasis on access to clean energy based on the country’s hydro assets. During the same period, the institutional and regulatory framework was deeply restructured, leading to the liberalisation of the electricity market, the setting up of a regulator, and a new law governing the electricity sector adopted in 2011. Ten years later, despite the introduction of a Transmission System Operator, some Independent Power Producers and improvements in energy supply being seen to have a positive impact on the ongoing energy policy, the fact remains that quality access to sufficient electricity supply is a real challenge for majority of Cameroonians. It is obvious that the timidity observed in the development of energy infrastructure in Cameroon is attributable to the slowdown of investments in decentralised energy production, most likely the consequence of an unfavourable investment environment. This is corroborated by the 2019 World Bank’s Ease of Doing Business ranking which ranked Cameroon 167th in the world in 2019. This year Issues Monitor therefore shows that energy leaders in Cameroon are still concerned about uncertainty related to the Investment Environment and Market Design and Regulation. The latter is expected to experience significant progress as a result of the transfer of authority to regional governments, which effectively started with the first ever regional elections held on 6 December 2020. This reinforcement of the regions' authority could be expected to have a significant impact on the governance of the country's energy system, especially the liberalisation of the energy sector, the empowerment of independent power producers and ultimately, a more decentralised power supply system as this is considered as a key enhancer of energy access in rural areas across the country (See World Energy Issues Monitor 2020, World Energy Council).

In terms of priorities considered, the importance of mastering the demographic patterns is well understood by energy leaders, eighteen years after the second general census of the Cameroonian population and when debates are ongoing on the conduct of the third census. This takes into account the importance of understanding the demographic patterns to the country's development strategy, which inevitably addresses, among other issues, demand pull, land and water availability and urban design, which are also perceived by leaders as actions priorities. Also, the relevance of digitalisation as an action priority for the national energy context could be explained by the expansion of mobile connectivity that is driving change in various sectors, including energy with online billing and payments through partnerships between energy companies and mobile phone operators.

The results of the World Energy Issues Survey were discussed with WEC Cameroon members on 12 February 2022. The workshop supported the emerging findings while drawing out three key highlights to summarise the country’s current energy landscape:

1. Changes taking place in the global energy landscape is affecting the future of urban design in Cameroon.

With forecasts for hydrogen and the imminent arrival of electric vehicles, the future design of urban centres must necessarily integrate the uncertainty of logistical plans associated with the future access to energy.

2. Improving the energy supply remains a challenge to overcome in Cameroon.

Allowing sustainable access to energy to all Cameroonians has always been the objective of the strategies put in place by the government. However, the uncertainties identified by the leaders in this survey point to issues that need to be discussed in the development of future policies.

This can be seen in the various official commitments (e.g., ratification of the Paris Agreement) made by Cameroon internationally to protect the environment and its desire to increase the share of renewable energy in its energy mix. Cameroon’s Technology Needs Assessment (TNA) and elaboration of a Technology Action Plan (TAP) for climate change adaptation and mitigation is currently ongoing and the energy sector is one of the two sectors considered in the process. However, most renewable energy projects are struggling to find financing and a legal framework that is favourable to the participation of the private sector, however the realisation of this ambition is still expected.