< Back
Annual ranking of 129 countries finds number of AAA countries drops from five to three while four countries put on negative watch
• Investment in energy is becoming ever more critical as energy systems come under stress
• Funding challenge to become more acute with new rules, but alternatives exist
• Developers must go beyond their comfort zones to unlock the US$48 trillion of energy investment

24 November 2014, Washington DC – The decisions that investors make today in the energy sector will make or break the sustainability of global energy systems for years to come, according to a new report from the World Energy Council. 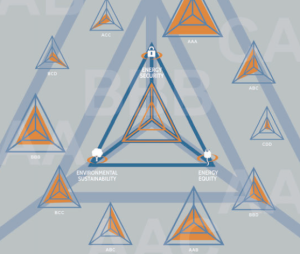 The report finds that as global energy systems are being placed under increasing strain and as governments limit their spending under tough economic conditions, the ability to invest the US$48 trillion required over the next 20 years into energy could be put in jeopardy, threatening countries’ ability to supply sustainable, reliable, and affordable energy for their people.

The study, “World Energy Trilemma: time to get real – the myths and realities of financing energy systems”, conducted with the global management consulting firm Oliver Wyman, analyses what is needed to unlock the required energy investment and is based on extensive interviews with close to 50 leaders from the international energy finance community.

Joan MacNaughton CB, Executive Chair of the World Energy Trilemma work, commented:
“Unlike many commentators’ warnings, our report finds that capital is available in the private sector to the required scale, but the patterns of investment will need to change radically in terms of the type of energy source, technology, and infrastructure. Above all, investors and developers will have to invest way beyond their comfort zones, and they will need better help from governments, regulators, and international financial institutions than is currently envisaged.”

The report cites an estimated cumulative investment of US$40.2 trillion to be required across the global energy infrastructure supply chain with an additional $8 trillion in energy efficiency over the period from 2014 to 2035.

The funding challenge is made yet more acute as new financial rules could further reduce private finance to be channeled into energy projects. For example, the Basel III regulation, which is meant to safeguard the financial system by limiting the amount of risky assets that banks take on, could reduce infrastructure loans and thus hinder the financing of long-term, capital-intensive conventional and renewable energy projects. More expensive risk-adjusted loans are likely to make a number of projects financially unattractive.

At the same time, as traditional long-term bank debt becomes harder to secure, energy project developers are looking towards alternative financing sources such as pension funds, insurers, green bonds, sovereign wealth funds, private investment funds, and asset managers which are seeking to increase their infrastructure assets. Other funding sources or instruments, such as with the maturation of financial markets in developing economies, may evolve in coming decades to further reduce investment blockage, the report notes.

François Austin, Global Head of Energy Practice from project partner Oliver Wyman, commented:
“Uncertainty around technological developments, energy politics, changing regulations, and volatile energy and commodity prices are all adding a significant risk premium to the cost of capital for energy investments. The huge energy needs around the world offer significant market opportunities if robust and equitable pathways are provided for the private sector. The recommendations to improve countries’ balance on the energy trilemma through necessary investments can be delivered with coordinated efforts by governments, investors and energy companies.”

This year’s Energy Trilemma Index, a quantitative ranking which accompanies the Trilemma report, has placed four countries on negative watch (Japan, Germany, Italy, UK), while other countries could improve in one or more trilemma dimensions. Of the 129 countries in the ranking, only three have achieved an ‘AAA’ score on their trilemma performance, with one of those countries being the UK which is showing a downward trend in energy security.

Joan MacNaughton added:
“Even countries with strong incumbent energy infrastructure are having a hard time balancing their energy trilemma, while many others are still struggling to meet their population’s basic energy needs. The persistent gap and future barriers to energy funding will only exacerbate an already fragile global energy system. Clearly countries must act now to reverse this oncoming storm: there is no time for complacency.”

In addition, two countries (Mexico and the UAE) have been put on positive watch, while other countries (such as Colombia and the Philippines) are making strides in improving their energy sustainability on all dimensions of the trilemma. These countries’ positive outlook shows that improvements can be made with the right policy framework in place.

To achieve the necessary investment levels, the 2014 World Energy Trilemma report has identified the following recommendations from the financial sector:
• Policymakers must focus on implementing the regulatory and policy frameworks to encourage investment and reduce political and regulatory risks.
• The financial infrastructure must be in place for capital to flow easily to the energy sector, while financiers need to get more comfortable with investing in new technologies and in developing countries, where the need for new infrastructure is mostly concentrated.
• The energy sector must generate a robust pipeline of bankable projects.

The report’s findings will be discussed with officials and leaders from government, finance and industry at a specially convened meeting in Washington DC today. They will also be shared with ministers in 95 countries and will form the background of ongoing discussions at the 20th Conference of the Parties (COP-20) meeting to be held in Lima, Peru in December 2014.
###