The Iceland National Committee aims to promote sustainable energy development in Iceland, as a part of the World Energy Council’s energy vision. As a member of the World Energy Council network, the organisation is committed to representing the Icelandic perspective within national, regional and global energy debates. The committee includes a variety of members to ensure that the diverse energy interests of Iceland are appropriately represented. Members of the committee are invited to attend high-level events, participate in energy-focused study groups, contribute to technical research and be a part of the global energy dialogue.

Halla Hrund Logadóttir is the Director General of Iceland‘s National Energy Authority. She is also an Adjunct Lecturer at the Harvard Kennedy School where she teaches the Arctic course,  focusing on climate change and sustainable development. Ms. Logadóttir is the Co-Founder and former Co-Director of the Arctic Initiative at the Harvard Kennedy School and the Founder of the Arctic Innovation Lab, established to encourage business and social innovation across the Arctic region. Previously, Ms. Logadóttir was the Director of the Iceland School of Energy at Reykjavik University where she also taught energy policy. Ms. Logadóttir is a frequent commentator on environment, energy, and innovation. She was one of the 15 invited writers in United Nations Chronicle's special edition on sustainable energy published in relation to COP21 and co-curates the World Economic Forum's Arctic Transformation Map. Among her other roles include being the Co-founder of Girls4Girls non-profit; a global mentorship program which aims to arm young women with the courage, vision, and skills needed to take on public leadership. Earlier, Ms. Logadóttir worked on an entrepreneurship training program in Togo, West Africa, on the "Aid for Trade Initiative," at the OECD in Paris, and as an EU and bilateral officer for Iceland's Minister for Foreign Affairs in Brussels. In 2016, Ms. Logadóttir was selected as a Louis Bacon Environmental Leadership Fellow through Harvard's Center for Public Leadership and earned an MPA degree from the Harvard Kennedy School. Before, Ms. Logadóttir studied a combination of political science, economics, energy policy and trade at the University of Iceland the London School of Economics, and the Fletcher School of Law and Diplomacy at Tufts University.

Baldur Pétursson is Manager - International Projects and Public Relations at the National Energy Authority in Iceland.

In possession of extensive domestic and international experience in administrative work for many years, he has worked as International Projects and Public Relations Manager at the National Energy Authority in Iceland, working on various international projects and programs, e.g. working in cooperation with FMO, World Energy Council, etc.  He was also the Head of Unit within the Ministry of Industry and Commerce for several years, as well as Member and/or chairman of several domestic committees and reports on industrial sectors. Moreover, he was Counsellor at the Icelandic Mission to the EU in Brussels, Member of the Board and later Executive Alternate Director at the European Bank for Reconstruction and Development (EBRD) in London, Member of the Board at Islandsbanki in Iceland (2010-12). He has also served as member of several international committees e.g. within OECD, EU, EFTA, EBRD, IPHE, NORA, Nordic Ministerial Council, Energy Charter, World Energy Council (WEC), WEC Europe Committee and WEC Strategy and Communication Committee and Nordic Energy Research.

His educational background includes a MSAS in International Business from Boston University in the United States, Business Administration from the University of Iceland and in possession of the certification Assessment of the Eligibility as Chief Executive Officers and Members of the Boards of Directors of larger Financial Undertakings approved by the Financial Supervisory Authority in Iceland, 2010. 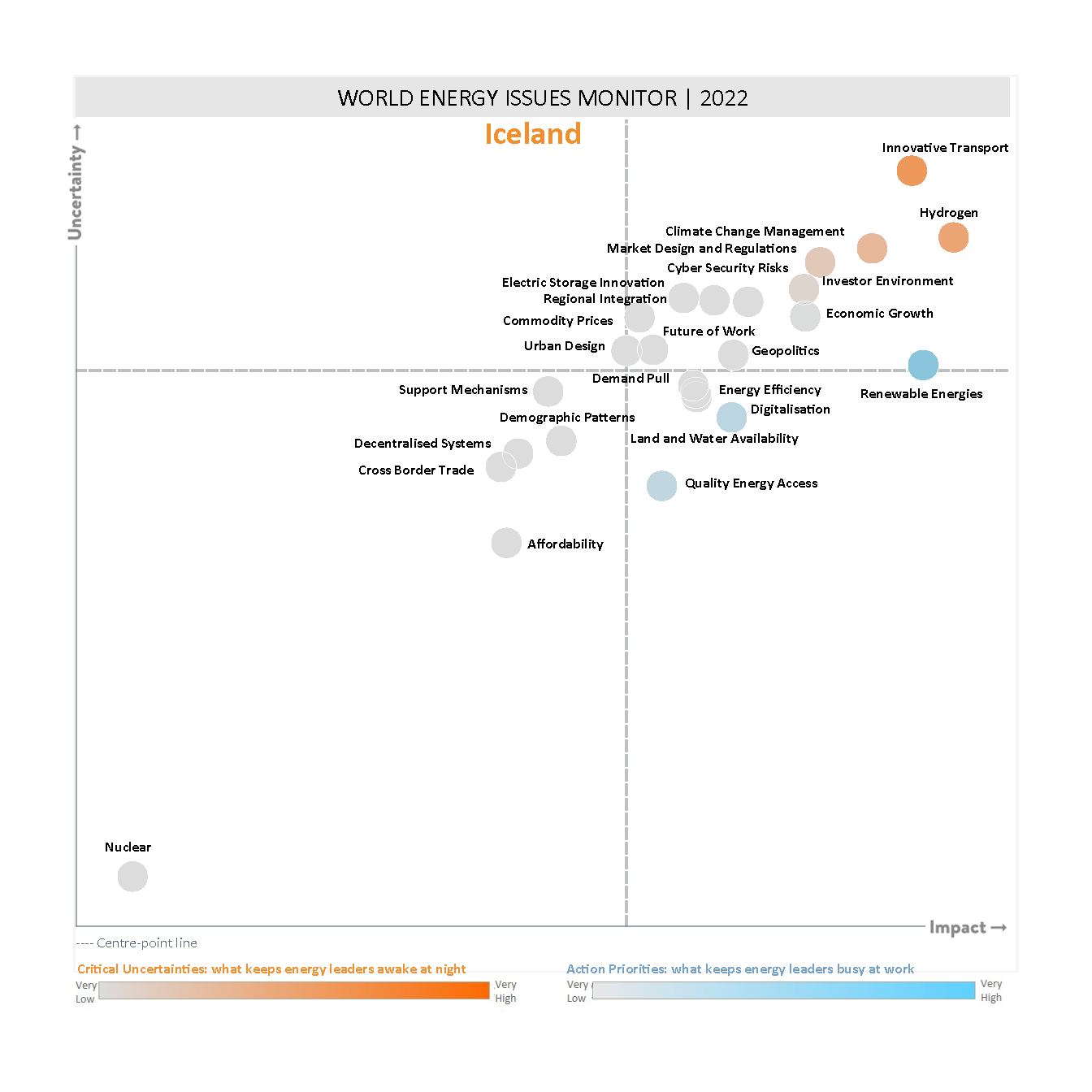 The most critical uncertainties for Iceland are innovative transport, hydrogen, and climate change management, followed by market design and regulation and investor environment.

Climate change management within the energy sector in Iceland is focused on energy transition from fossil fuels to clean energy for transportation as well as green innovation for carbon removal. Iceland has an advantage with 90% of its primary energy consumption originating from renewable resources in 2020. The country has the highest share of renewable electricity production per capita in the world, and space heating and hot water are completely sourced from renewable energy. Iceland has submitted an updated nationally determined contribution (NDC) under the Paris Agreement, enhancing its commitment to at least 55% net greenhouse gas emissions reduction by 2030 compared to 1990, to be achieved by acting jointly with the European Union, its Member States and Norway. Furthermore, the country has a Climate Action Plan for emissions reduction of 40% by 2030 compared to 2005 levels and has declared to become carbon neutral by 2040 and at the same time becoming independent from fossil fuels. Green innovation in Iceland has led to marked achievements in carbon capture, storage and utilization (CCS and CCU) methods. These technologies can provide solutions for emission reduction from carbon emitting industries, geothermal power plants and through direct air capture, and create valuable products with CCU solutions. The remaining dependency of fossil fuels, accounting for 10% of Iceland’s primary energy demand, puts emphasis on innovative transport solutions for energy transition in land transportation, fishing and aviation. To replace the fossil fuel consumption, Iceland will need to rely on two main approaches: direct electrification in all sectors where technically feasible, and alternative fuels for other sectors. Direct electrification will most likely dominate the personal car fleet as well as for a range of sizes of trucks and buses, as it has great advantage over alternative fuels in terms of energy efficiency. Iceland has the second highest rate of new registrations of electric passenger vehicles in the world. Additionally, biogas production is increasing and will play a role in the energy transition in all sectors. Hydrogen (or hydrogen derived e-fuels) will come into play for heavy-duty transportation modes, both in the marine and aviation sectors. Iceland has the potential to produce green hydrogen and e-fuels domestically, as competitive electricity prices and 100% green electricity grid make such production attractive. The Icelandic authorities are currently working on a hydrogen and e-fuels roadmap for Iceland.

Market design and regulation is considered as a critical uncertainty, reflecting, among other factors, delays in planning and permitting for both energy infrastructure and production, a lack of clarity regarding regulatory framework for wind development, the domination of the current market by a few energy producers and the lack of clarity on a mechanism to ensure energy security for the general market. The national debate on new energy projects is focused on the balance between the three pillars of sustainability: namely the balance between nature preservation, economic benefits and social benefits of renewable energy projects. The Icelandic master plan for nature protection and energy utilization is used periodically to evaluate these three aspects of sustainability and to reach a conclusion on where new larger energy projects are feasible and where nature should be preserved. However, the approval of the newest versions of the master plan has been continuously delayed in Parliament, posing challenges for new energy projects for being realised. Finally, investor environment is also regarded as a critical uncertainty, reflecting the pandemic global trend, challenging economic conditions and other uncertainties regarding the investor environment for electric power producers.

The top action priorities are renewable energy, followed by digitalisation, quality energy access, economic growth and land and water availability. Renewable energies remain the top action priority as in 2020. High priority on renewable energy reflects actions towards addressing critical uncertainties like innovative transport, hydrogen, and climate change management that all require access to renewable energy. The Icelandic electricity system has recently shown signs of reaching its full capacity with increasing demand for green electricity, limiting energy access for new demand. There are two means to react to this challenge. Firstly, by increasing renewable electricity generation from e.g., hydro, geothermal or wind. This faces a number of challenges, like the delays of approval of the new master plan. Secondly, by strengthening the transmission system between regions, which is necessary to improve quality energy access in some of the country’s remote rural areas. Other measures to mention are measures for increased energy efficiency and digital solutions for optimizing the energy system. The Ministry for Energy and Environment has commenced a working group to identify the key challenges and solutions in the energy sector and is expected to publish its findings in 2022. In addition, the Parliament will review legislation for the new master plan for nature protection and energy utilization that will decide which resources may be used for electricity generation in the coming years. The role of digitalization has yet to be defined but it is expected to increase efficiency of the energy system, especially with the increasing direct electrification of the personal car fleet. Actions already underway in the digitalization field include replacement of old analogue meters by modern digital meters.

The top 4 issues that energy leaders in Iceland will prioritise in 2022 are renewable energies, climate change management, hydrogen, and innovative transport. All these priorities are indeed related and interlinked, as hydrogen and innovative transport are important elements towards mitigating climate change and at the same time can be based on abundant Icelandic renewable sources. Iceland is a country of natural forces, and the energy system is built with inherent resiliency and safety measures aimed against natural hazards and extreme weather events. Being isolated and self-sufficient for electricity generation, Iceland´s energy system is however vulnerable against demand and supply side disruptions. A key pillar in the recently published national energy policy is energy security, stressing the importance of clear market accountability, market failure prevention and energy resource availability to meet the future energy demand for general use (including transition of the transportation sector), industry and businesses.

Samorka, Federation of Energy and Utility Companies in Iceland 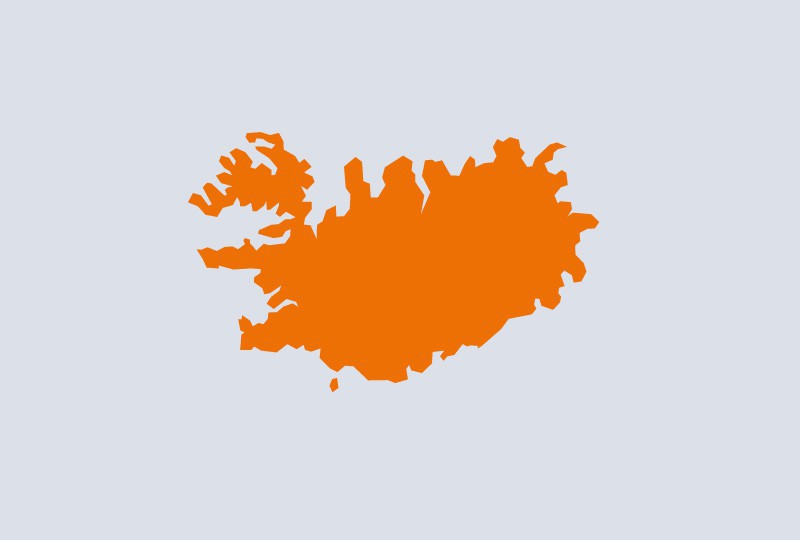 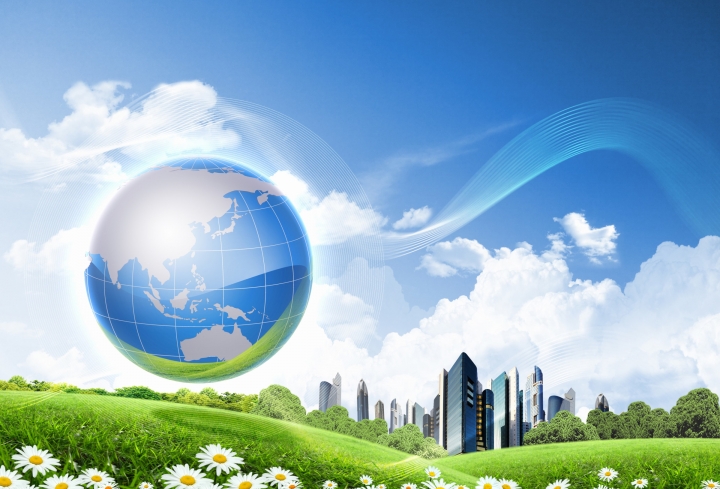 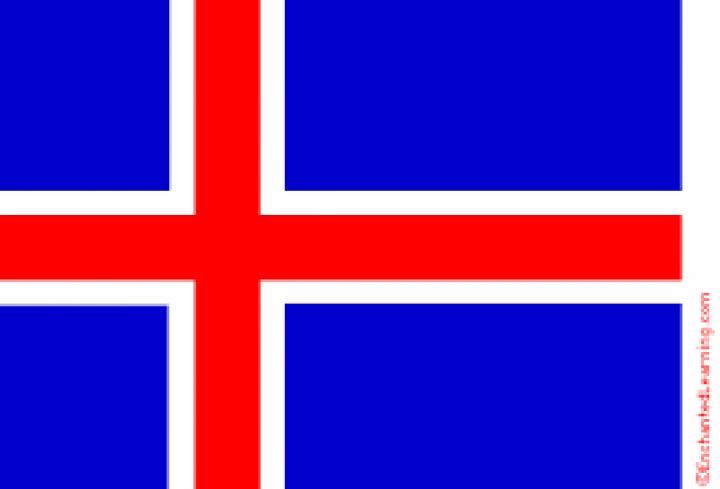