The Greece National Committee aims to promote sustainable energy development in Greece, as a part of the World Energy Council’s energy vision. As a member of the World Energy Council network, the organisation is committed to representing the Greek perspective within national, regional and global energy debates. The committee includes a variety of members to ensure that the diverse energy interests of Greece are appropriately represented. Members of the committee are invited to attend high-level events, participate in energy-focused study groups, contribute to technical research and be a part of the global energy dialogue.

Giorgos N. Stasinos, President of the Technical Chamber of Greece (TCG) is a Civil Engineer graduated from the Technical University of Patras. He has been member of the TCG Assembly from 2006 and Member of the TCG Executive Committee (2014- present). Mr Stasinos is also President of the Engineering Party of the Hellenic Party and of the European People’s Party since 2011.

Mr. Konstantinos Xifaras is the CEO of DEPA COMMERCIAL S.A.

He is a graduate of the Department of Production Engineering and Management of the Technical University of Crete and is specialized in Operational Research.

In September 2019, he was appointed CEO of DEPA at a crucial turning point, in view of the privatization process. Under his leadership, both the privatization preparatory stage and the corporate transformation in 3 distinct companies were successfully completed. Mr. Xifaras has been leading the effort to expand the company's activities through the use of smart technologies, the spread of the use of CNG as a vehicle fuel through FISIKON refueling stations network, and the promotion of natural gas as a marine fuel.

Mr. Xifaras is the Vice Chairman of the TCG and the Secretary of the Greek National Committee in the WEC. Moreover, he is one of the 18 CoChairs of the ECH2A and member of the Governing Board of Eurogas.

Mr. Xifaras has extended experience as a researcher and business consultant and has been appointed in leadership positions. He has served as Special Advisor to the Leadership of the Ministries of Development (2005-2006) and the Environment, Energy and Climate Change (2013). He has also held the position of Director of the Office of the Deputy Minister of Development, Competitiveness, Infrastructure, Transport and Networks, responsible for the management of the implementation and funds absorption of the NSRF 2007-2013 and the design of the new Programming Period 2014-2020.

Dr. Haris Doukas is an Associate Professor at the School of Electrical & Computer Engineering (ECE) of the National Technical University of Athens (NTUA). He is a mechanical engineer from the Aristotle University of Thessaloniki (AUTH), with a PhD in the area of decision support systems for energy policy and management, from the ECE, NTUA. His scientific and research expertise includes the development of decision support systems for energy and climate policy. He has almost 2 decades of working experience in the design of energy and climate policies and programs for the promotion of renewables, energy efficiency and management in a regional, national and European level. Moreover, he participates as a specialist in respective initiatives beyond Europe, such as the countries of the Mediterranean basin and the Arab states of the Gulf. 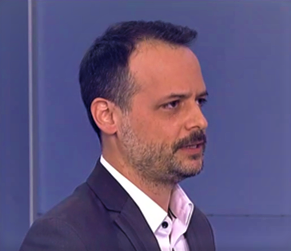 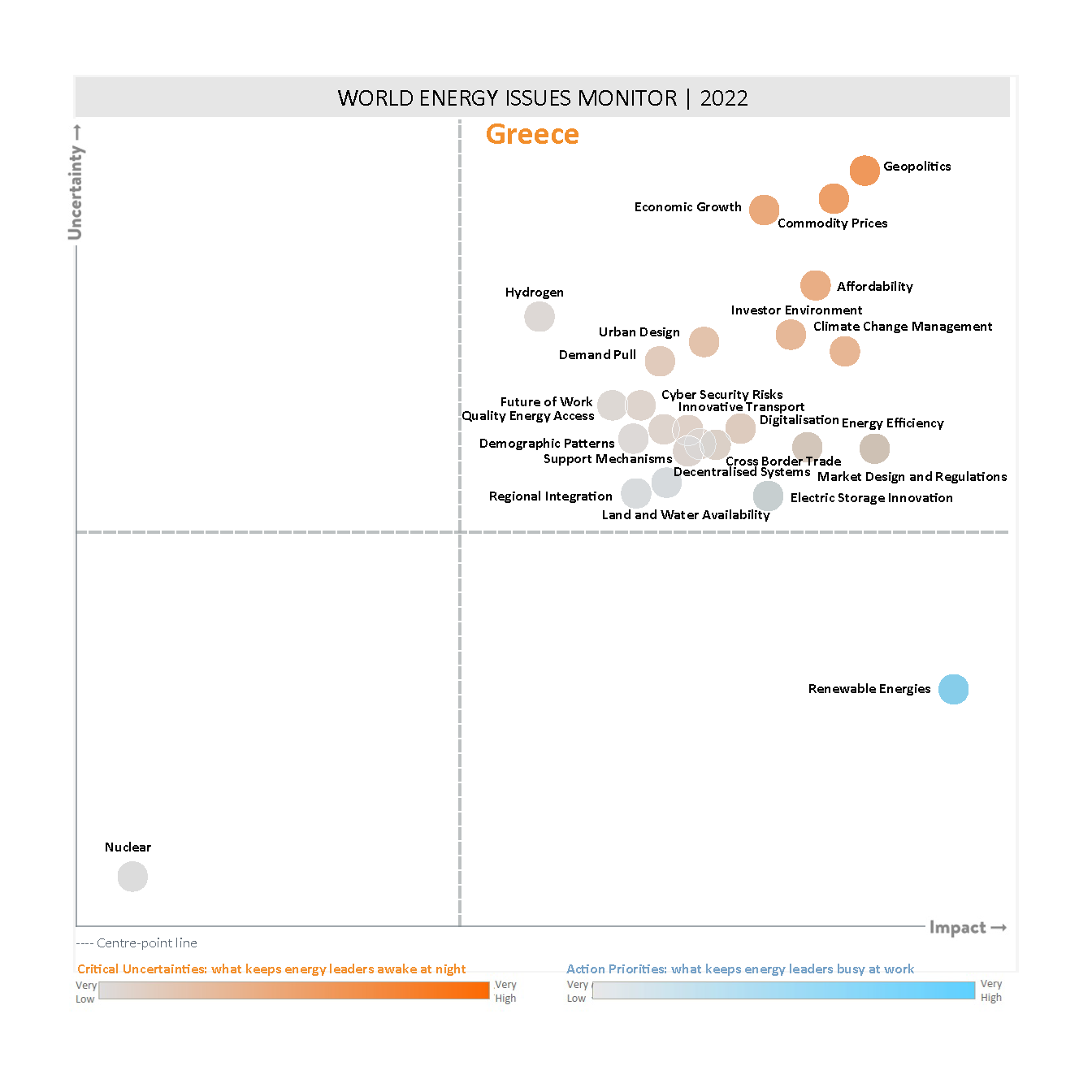 Geopolitics appears as the highest critical uncertainty for Greece’s energy leaders reflecting the impact of geopolitical tensions in the Russia-Ukraine front along with the reviving turbulences in the Eastern Mediterranean.

Gas prices surging all over Europe highly affected the country’s gas-dependent electricity production industry. The continuous rise of fuel prices coupled with the lack of Raw Materials due to Covid-19 pandemic, are affecting all industries horizontally and creating a high-risk environment for investors.

The affordability of energy and basic consumer goods is affected greatly by the energy crisis as well, leading to the high uncertainty shown in the results.

A social tariff scheme applies to protect vulnerable consumers from energy poverty. The eligible customers are increased due to crisis, based on the income and social criteria specified by the law, and thus the needed budget needs to be increased.

Climate Change management was also a critical uncertainty for Greece. The region has been impacted by extreme weather events during 2021, including fires that destroyed large forest areas. The recently proposed Climate Law further enhances the need for clear and ambitious national climate policy which is in line with and supportive of the EU energy and climate targets towards 2030.

Greek energy leaders unanimously recognise nuclear energy technology, as the issue with the most negligible impact on Greece’s energy planning. This is in line with the non-existent presence of the technology in the Greek electricity mix and the specific geomorphological features of the region (high seismic activity) that act as deterrents.

Renewable energies maintain their high impact and low uncertainty position being a key priority, given Greece is well on track with the ambitious goals of de-lignification and the targets set towards energy transition. By 2030, renewables are expected to reach 70% of Greece’s electricity mix, 30 percentage points up from today’s level. The congested transmission and distribution systems need to be upgraded, reinforced, and expanded. New storage and flexibility technologies must be developed and adopted to further enhance Renewables’ penetration, as it is noted by our Leaders. Although a net metering system for autonomous producers was for the first time introduced in Greece in 2014 followed by virtual net metering in 2016-2017, there were delays in the grids’ adaptation and development. A large-scale tender for investments in smart meters is expected to be commenced in 2022 that could be paired with Electric Storage Innovations to provide more options for both commercial investors and prosumers. Cooperation activities in energy production, through the establishment of energy communities gain more and more popularity and provide the means and potential to strengthen efforts to alleviate energy poverty and insure clean and low-cost energy for all.

By implementing the Target Model, Greece accomplished a key energy markets improvement. With the upcoming Market Reform plan, Greece aims to repair long-standing issues in the electricity markets, in enhancing its position in interconnected energy markets.

The results of the World Energy Issues Survey were discussed within the Greece Member Committee in February 2022. The workshop supported the emerging findings while drawing out three key highlights to summarise the country’s current energy landscape:

1. Gas prices connected to the high energy import dependency of Greece. It is crucial for Greece to lower dependency on imported gas and become more resilient to energy price fluctuations as clearly noted during the ongoing Gas price crisis.

2. Renewable energies is linked to natural gas uncertainty. Wind, solar and geothermal potential in Greece can be fully exploited, providing low costs even for citizens, business and the agricultural sector when appropriately coupled with energy storage, through cooperation activities that are strongly promoted by EU (Energy Communities).

3. The energy-efficiency-first principle has the most important impact after renewables. Increase of volume of investments is necessary to upgrade building of the residential and commercial sector by exploiting the EU’s Recovery and Resilience Facility. 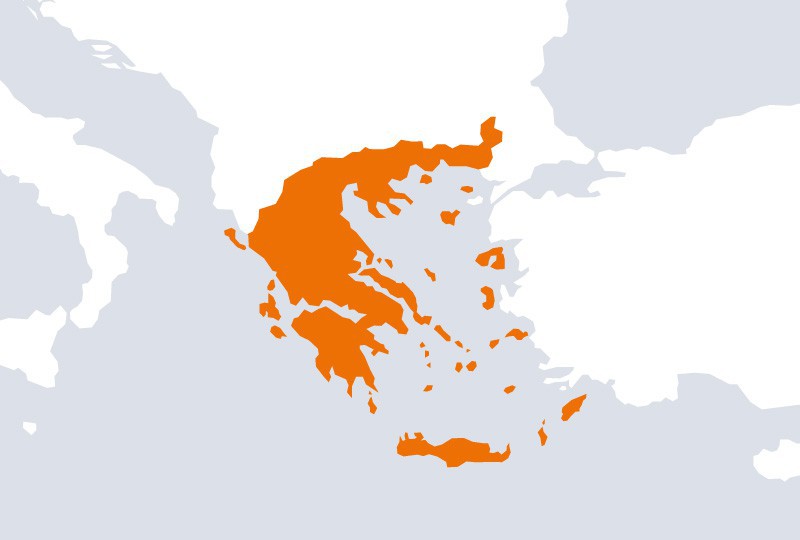 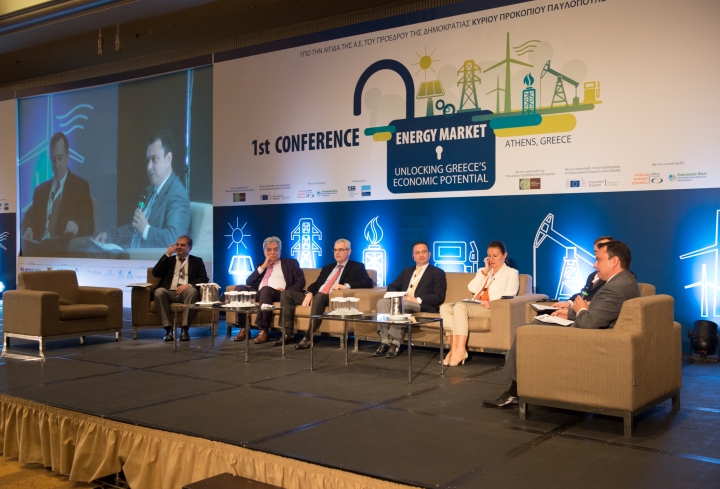