< Back
The significant interest in last month’s World Energy Congress reflected global concerns about today’s shifting energy agenda.
The flagship event of the World Energy Council, which took place in Daegu, South Korea from 13 to 17 October, gathered more than 7500 participants from 123 countries. These included 270 speakers from 68 countries, who discussed the most urgent energy challenges in an extensive four-day programme consisting 62 sessions, four community roundtables, and eight official side events. 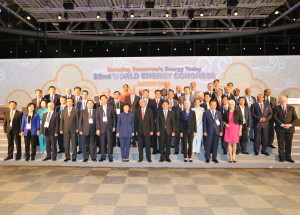 Notably, 52 ministers from 38 countries attended the Congress, which also hosted a public ministerial dialogue with eight government leaders, plus a closed Ministerial Roundtable for select ministers and heads of development banks.

The Congress hosted three other exclusive ‘community roundtables’: World Energy Council Insights, World Energy Leaders’ Summit, and the Global Electricity Initiative. As with the Ministerial Roundtable, these dialogue spaces provided an ‘invitation only’, peer-to-peer discussion of critical issues for the respective energy communities.

Korean President Park Geun-hye and Prime Minister Jung Hong-won attended the event in two separate visits. Having both attend the events shows Korea’s significant endorsement of the event, said WEC Secretary General Christoph Frei, as protocol would normally have either leader attending one given event. 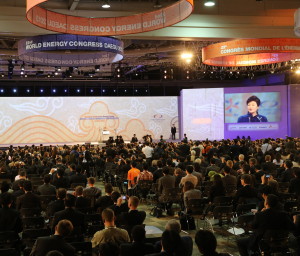 She added: “Our immediate challenge is to find a way of distilling the outcomes from all these sessions into a series of meaningful lessons or messages that we can take home to our respective stakeholders.”

Among the critical issues is the need to help close the gap between the availability and the need for energy. “Global energy supplies are plentiful … Yet, 1.2 billion people remain without access to energy.”

Mrs Nadeau made the remarks as she took the reins as WEC Chair at the Congress Closing Ceremony.

Christoph Frei, Secretary General of the World Energy Council, said the other top energy issues are the lack of a globally recognised carbon framework, the global recessionary context, fluctuating energy prices, and the poor uptake of carbon capture technologies which could dramatically reduce CO2 emissions but have not had enough RD&D support.

So the Congress took place at just the right time: “The Congress was the perfect platform for leaders to understand the high uncertainty and rethink the notion of resilience.”

Against this context of uncertainty, the WEC issued a statement at the Congress to help the global energy sector navigate through the uncertain times. The statement, drawn from the WEC’s energy studies, challenges a number of myths that have been influencing thinking in the energy sector.

Held every three years, this year’s Congress adopted the theme “Securing Tomorrow’s Energy Today”.  Sessions covered a broad range of energy issues, including the impact of global shale gas, the true potential of renewables, and a look at how policymakers, industry and key decision-makers must work together to form more sustainable energy systems.

The event concluded with the signing of the Daegu Declaration between the World Energy Council and Korea’s Ministry of Trade, Industry and Energy (MOTIE). In it, MOTIE has agreed to work with the WEC to inform the 2014 Clean Energy Ministerial, to take place in Korea, with the recommendations of the Congress, while the WEC will support MOTIE in developing joint working activities. In the declaration the government of Korea has also recognised the WEC's contribution on the rule of trade, which has informed the Asia-Pacific Economic Cooperation (APEC) agreement on tariff caps for 54 types of green goods by 2015.

Daegu marks only the second time that the Congress has been hosted by an East Asian city. Tokyo was the first venue, in 1995.