Bolivia at the heart of regional integration

Home > News & Views > Bolivia at the heart of regional integration 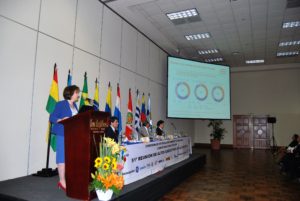 As Bolivia faces a series of generation projects that aim to consolidate the country as the centre of energy within Latin America, the Bolivian member committee of the World Energy Council held a workshop to explore the global panorama of the hydroelectric sector and its impact on Bolivia.

From a global perspective, in the last 10 years the demand for electricity in the world has exploded exponentially as a result of economic and population growth and the economic growth in developing countries such as Bolivia where people now have more access to electricity.
At the event, Reunion de Altos Ejecutivos at the Commission for regional electricity interconnection, Zulandi Van der Westhuizen, Deputy Director of World Energy Council Resources, explained: "Bolivia currently has more than 50% electricity generation based on fossil fuels, if Bolivia can change its generation and expand its hydroelectric capacity would be more beneficial for the country, since gas is a product that can be exported ".

She also added, "the use of hydroelectric power and its export introduces a greater degree of predictability and stability in the economy unlike fossil fuels like gas and oil that have different cycles in their prices. The world's 10 largest generation stations in the world are nine hydroelectric and one nuclear power station in Japan and is currently not operating, so we have covered the entire larger area."
However, with every hydroelectric project according to its characteristics there are both positive and negative environmental and social impacts on plants, on fish, evaporation of lakes, and in some cases even the relocation of ethnic groups.

But each of these problems and challenges have generated innovative ways of resolving and adapting them through use of new technologies. It is for this reason that hydroelectric generation must be viewed from a systemic point of view in order to induce the least possible impact.
"There are not only benefits in the energy sector such as in other renewable sources, but   other benefits as in agriculture in terms of water for irrigation, flood control as with the dam of Three Gorges located on the Yangtze River in China. The dams can also be used as recreational areas," explained Ms Van der Westhuizen.
The Bolivian Ministry of Energy headed by Luis Albert Sanchez, then discussed the comparison between the development of alternative energies such as solar and wind compared to hydroelectrics, of which Ms Van der Westhuizen explained that renewable energies are complementary, and that it is difficult to develop only wind and solar projects without having a stable generation such as hydroelectricity.

Because in hydroelectric generation water is stored and consequently energy, a situation which does not occur with other energies, allows to balance the electrical system and is not paid for fuel.
“Hydroelectric plants have high levels of efficiency and the opportunity for renewability, it is easy to modernise equipment, this power source has a longer lifespan, we are talking about 100 years at least, most other renewable energy sources very rarely get to spend the 20 years of life, that makes it a sustainable and reliable source of energy, explained Ms Van der Westhuizen.”
Referring to the recent opposition by protestors to hydroelectric projects, such as the construction of dams in the El Bala and El Beu canyons on the Beni River, Ms Van der Westhuizen commented, "not only in Bolivia, do these groups try to focus on a very specific issue and do not analyse the problem in a systemic way, especially in developing countries.“It is important that countries view sustainability within a much broader scope that includes the financial sustainability of the country, the economic sustainability of the community and the sustainability of society.”