Canadian Energy Sector gathers to chart the year ahead 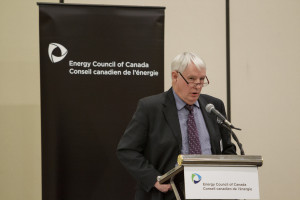 Our Canadian Member Committee, the Energy Council of Canada, held its first meeting of the year on February 2 in Ottawa and attracted 174 attendees, including 15 Ambassadors/High Commissioners and representatives of 51 countries. The discussions focused on the “energy value chain” plus two presentations: one highlighting the implications for Canada from the COP-21 conference highlighting actions already underway; and, a closing presentation on critical issues for the year ahead and beyond.

Kim Rudd, Parliamentary Secretary to the Minister of Natural Resources of Canada, opened the meeting highlighting the new government’s interim review principles for major resource projects, which she characterized as key to securing public confidence and to laying the groundwork for a stronger and more resilient energy sector.

The first panel session on Oil and Gas, Chaired by Mark Sherman, Vice President and Chief Operating Officer, Irving Oil, outlined the recent impacts of oil price declines, regulatory uncertainty, and continued market access limitations. With the lowest active rig count since the 1980s, impacts on employment and capital expenditure have been severe in Canada. The drop in oil and gas-related investment in turn has significant and not-fully appreciated implications for the national economy. Despite such turmoil – and the unlikelihood of short-term price relief – panellists expressed confidence in the sustained importance of oil and gas resources, and in the sector’s ability to find its place in a low-carbon economy. The importance of transparency and greater public trust were acknowledged. Specific opportunities, such as expanded access to and use of natural gas, were outlined. An attendee from the diplomatic community noted that foreign support for projects such as LNG export facilities hinges on timely major-project review. Panellists endorsed the need for a demonstration that Canada can still get major resource projects built.

In the session on the Electricity sector, which was chaired by Colin Clark, Chief Technical Officer, Brookfield Renewable Energy Group, panellists noted Canada’s enviable position by virtue of its 80 per cent emissions-free electricity system. Specific clean-energy advancements were noted, including the large-scale investment in refurbishment of nuclear baseload capacity in Ontario. That said, panellists agreed that the outcomes of COP21 will drive further significant change, with deep de-carbonization being dependent on deep electrification in areas such as transportation. Increased use of renewables and energy storage will be key to this transition. Leveraging Canadian expertise in areas such as grid integration of multiple generation sources represents further opportunity. Improved east-west grid interconnectivity is likely to be required to support ongoing emissions reductions and increased electricity supply. Finally, the importance of securing sufficient human resources was underscored, in light of both the needs driven by infrastructure renewal and other projects, and the demographic challenge of a pending retirement bubble.

The discussion around the outcome of COP21 with an address on the Implications for Canadian Industry from Fiona Jones, General Manager Sustainability, Suncor Energy, Inc., who noted a promising change in tone and approach in both the lead-up to and during COP21. A de-escalation of the rhetoric has led to a more inclusive and open dialogue in Alberta between government, industry and environmental activists. Pre-COP21, these discussions resulted in a more practical and politically acceptable package of policies to achieve nationally determined targets. COP21, she said, has clarified a path forward for the industry and governments. Ms. Jones further suggested that there may now be renewed potential for broad engagement towards the development of a national energy strategy.

The closing keynote was given by Michael Cleland, 2015 Canadian Energy Person of the Year who reviewed the potentially transformative forces impacting the energy sector, beginning with the possibility of declining energy demand. He spoke of the disconnect between current energy and climate aspirations; to the growing challenge of earning public confidence in energy projects; the concurrent likelihood of slower and more costly regulatory reviews; and to a potentially significant cumulative impact on energy demand arising from many incremental technological changes underway. With all this in the backdrop, Cleland urged an open and honest discussion in Canada that properly accounts for both energy and climate realities.

The Energy Council of Canada will issue a report on the highlights of the presentations and discussions with a brief summary prepared by their communication consultant. Details available from http://www.energy.ca/.