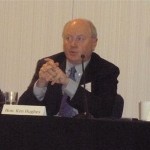 The Summit covered a diversity of energy issues facing Canada. Speakers included over 30 industry players, 16 energy associations, academics, foreign dignitaries, and representatives from federal and provincial governments. All sessions included presentations with open discussions and full participation of those in attendance.

Rich Coleman, British Columbia’s Minister of Energy, opened the summit with particular reference to the potential of LNG projects for the province.  Alberta’s Minister of Energy, Ken Hughes, was the closing speaker and spoke of the importance of ensuring a balance in the pursuit of energy projects from a social, environmental and economic perspective.

A highlight was the Sectoral Energy Associations’ Roundtable where eight different industry associations offered their views on what elements should comprise a framework for a Canadian energy strategy.

At the event the Energy Council of Canada announced its Energy Policy Research Project. The project is designed to establish research partnerships with a number of Canadian academic institutions to address the creation of energy-related policy in Canada. Presentations made at the Summit are available here.