Humanising energy transition requires meeting the growing energy demand of one fifth of all humanity. Only 43% of the population of Sub-Saharan Africa has access to basic electricity – less than half of the global average of 87%. This lack of access constrains modern economic development and negatively impacts life expectancy and quality of life, it also severely limits adoption of emerging technologies in areas from banking to education to agriculture. The lag in economic development also puts African countries at increased risk from new energy shocks – the consequences of extreme weather events and other impacts of climate change.

The World Energy Council’s 2019 World Energy Trilemma Index indicates there has been a step change in progress toward basic access in some Africa countries, with many making substantive improvements, particularly in access to energy and clean cooking under the UN Sustainable Development Goal 7. While these improvements are promising, the challenge of accelerating transition to clean, affordable and productive energy for all in Africa is unfolding in an era characterised by an acceleration of fintech innovation, intensifying global economic competition and new trade tensions.

Africa’s current 1.2 billion population is projected to double by 2050, adding an urgency to the already pressing need for investment in an African energy transition - not only for the region itself but for the future of a European neighbourhood, in the event mass migration along regional corridors are triggered. 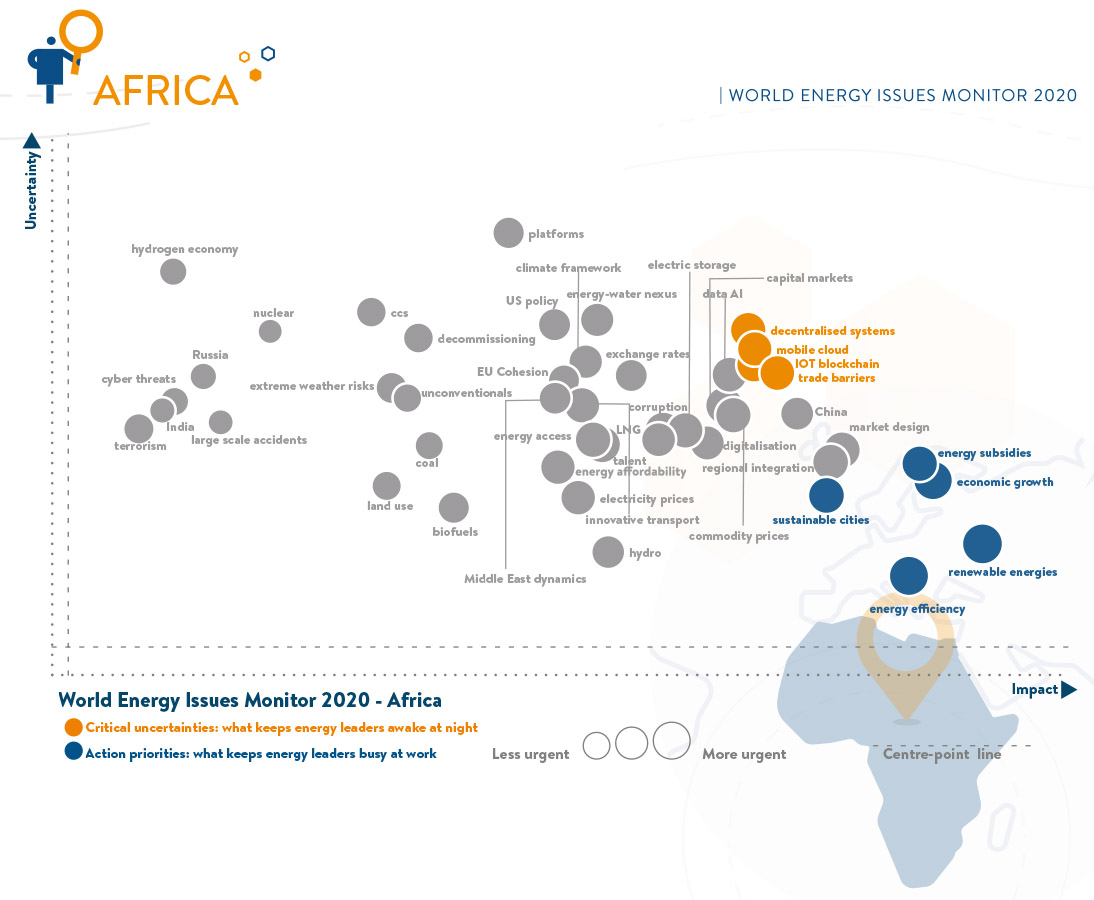 As we address the challenges in enabling fast and future fit energy transition for the increasing share of humanity in Africa: financial and human investment must reflect technological and societal shifts.

Africa’s demand for coal is at its peak, but elsewhere innovation in other energy technologies is skyrocketing. Worldwide investment in renewable energy was US $282.2 billion in 2019, up 1% on 2018. Wind, both offshore and onshore, led the way with $138.2 billion, up 6%, and solar next at $131.1 billion. Battery storage doubled last year to 106 GW and is expected to surpass 1000 GW by 2040, requiring an investment of US $662 billion over the next two decades and enabling a halving of batter storage costs.

Energy nations and large energy companies have also been signalling their intentions to make huge investments in CCS and moves toward a circular carbon economy. Global investment in clean hydrogen continues to rise, with China leading the way followed by the European Union.

Energy investments are increasingly linked with activism, with what was once only individual investors now reaching institutions like Blackrock, which manages US $6.9 trillion in assets, leading the charge to divest from coal. Recipients of international investments are also shifting, with cities, not countries, now the starting point for investment decisions. There is, however, consensus that there is a significant gap in global energy investment – and an investment cliff in the case of Europe – which amounts to trillions of dollars globally.

Estimating the level of investment needed for whole energy systems transition is not an easy task, but one that depends on the developments of regionally diverse energy systems and unique policy contexts. The World Energy Council’s recent World Energy Scenarios report estimates investments of roughly USD $670-890 billion per year will be needed just for power generation. To enable such massive investments, supporting policies will need to be developed and implemented, sometimes against the grain of established market structures. Given the size of the challenge, infrastructure is rapidly emerging as the new frontier of innovation. Effective long-term planning is needed for innovation in new build, maintaining existing, decommissioning and repurposing options.

New energy access and infrastructure investment, however, is not all or only about meeting the costs of adding new renewable electricity generation or to drive to decarbonisation via accelerating investment into decentralised, renewable electrification.  Enabling new and better human and economic development opportunities, and a healthy planet, requires investment to also flow to other uses of energy which cannot be electrified – clean heat and clean fuels. This will be needed for decades to come for diverse lifestyles, new industrial development and long-distance transport. A next era in digital and physical productivity, in tourism and trade of energy and non-energy resources, goods and services are emerging.

The flow of money into Africa is changing. Remittance flows to sub-Saharan Africa are estimated to have reached $49 billion in 2019, up by 5.1% compared to 2018. Remittances globally have exceeded official aid – by a factor of three – since the mid-1990s, and this year they are on track to overtake foreign direct investment flows to low and middle-income countries including sub-Saharan Africa.

The New Partnership for Africa's Development, in partnership with the African Development Bank Group, has worked to address barriers caused by the issue of multiple currencies and exchange rates, creating opportunities for countries to pool their monetary resources and work for common objectives, including energy infrastructure investments.

The development of modular clean energy technologies also opens a new opportunity for mid-scale financing options to help avoid risk of rapid urbanisation without commensurate development of industrial and manufacturing sectors. New financing options that identify synergies emerging across different sectors of the economy, and which attend to the co-benefits of affordable and productive clean energy access for all, will be needed to avoid the derailing of climate mitigation by the social impacts energy agenda.

With all of this, there remains a realistic hope for Africa – an energy transition that enables the region to “leapfrog” to a new hydrogen economy, the development of circular carbon economy models, and access to new global trade and digital economy opportunities

The largest challenge we currently face is how to move forward faster and together by ensuring a seat for new energy society as the table. Faced with investors focused on quick returns, there is a growing imperative to incentivize new and long-term energy investment thought market design innovation. The challenge is three-fold: