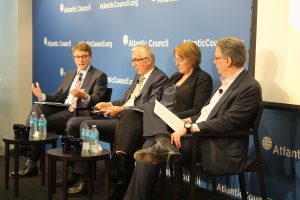 Germany has to cover 70 % of its energy needs by imports. The only domestic energy resources, Germany produces are lignite and renewables.  In contrast the US will probably be a net energy exporter within the next ten years.

The power sector is evolving rapidly.  Renewable energy is expanding as a share of electricity generation worldwide. In 2015, new capacity installations of renewables exceeded that of conventional for the first time. Alongside this trend, low natural gas prices in the United States have led to significant fuel switching from coal to gas.

In Germany, nuclear power is not any more seen as a vital part of the power mix. In the United States, new builds on the basis of nuclear energy are questioned, because other options are more competitive.

In a panel organised by the Atlantic Council, power sector experts from the United States and Germany convened to discuss the US and German approaches to energy transformation on 15 February.

Key discussions centred on the drivers of this transformation, comparing the challenges these innovative countries are facing, what approaches are being taken, panelists will elaborate upon the US and German experiences and highlight similarities, differences, and recommendations for future action

Nuclear energy will be completely phased out in Germany by the end of 2022. The share of renewables is 30 % in Germany, that means twice as high than in the United States. Germany has nine neighbouring countries, and its electrical system is interconnected with the systems of these countries. In contrast to Germany, the United States does not have a unifying energy policy at the federal level.

The very ambitious targets of the German Energiewende by 2050 besides halving the primary energy consumption include:
So far, greenhouse gas emissions have diminished by 27.5% from 1990 to 2016. The share of renewable energies in total power consumption increased by five-fold by 2016 compared to the level in 2000. This happened as a consequence of the generous funding and governmental guarantees for operators.

Germany has got a power capacity of 210 Gigawatt, half of that on the basis of mainly fluctuating renewable energies and the other half on the basis of conventional energies. This capacity is more than twice as high as the peak load in Germany, resulting in high system costs, which are further pushed up by the required extension of the grid system. This is results in higher electricity prices for industry, which are twice as high as in the United States on average. The price level for private consumers is even three times as high as in the United States.

The support charge for renewable energies, paid by the German electricity consumers, reached a total of 150 billion Euros within the period 2000 to 2016. German customers have paid and are still paying for the learning curve the country has been going through for solar PV and also for wind energy. The good news is other countries are benefiting from it.

The achieved cost reductions improve the scope of boosting the share of renewable energies also in the United States, without even utilising the still untapped potential of energy efficiency. With respect to climate mitigation, carbon capture and (usage) storage (CC(U)S) is an important option besides energy efficiency and renewable energies. The U.S. – in contrast to Germany – can be seen as a front runner in implementing the CC(U)S technology.