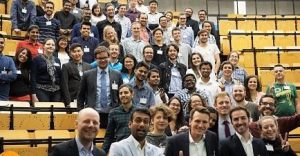 The 2nd conference of the European Energy Students Network (ESSN) held in Berlin on 20 May, supported by the German Member committee of the World Energy Council, convened more than 100 young energy professionals and students from 12 countries in Europe, to explore future developments within the energy sector.

In a panel discussion on nurturing young talent, Future Energy Leader, Javier Jimenez Perez and Christoph Menzel, presented the German Young Energy Professional’s mentoring programme to establish a link between the ESSN and the programme. Many of the students originally hailed from all over the world including India, Bangladesh, Colombia and Mexico.
The Council’s Future Energy Leaders’ Secretary, Filipe de Mota, discussed the potential benefits of Blockchain and its impact on the energy sector and why it’s relevant for natural resources.

He commented: “The Natural Resources industry relies heavily on the exchange of information among several intermediaries due to its complex supply chain. In the era of a “new oil price”, the industry has been exploring how they can help deliver high levels of trust, reduce cost and improve productivity in an effective and efficient way. The market players have been looking for advanced digital technologies to support cost optimisation, automation, and simplification and among the digital solutions, Blockchain seems to be most disruptive.”
Mr Menzel, a Young Energy Professional, also gave the keynote speech, ‘World energy Scenarios 2060 of the World Energy Council –Implications for the European Energy Future’, based on the Council’s World Energy Scenarios report launched in 2016, which presents three distinct trajectories for the energy sector to 2060.

Other hot topics on the agenda within the various sessions included the status of legal and technical issues in relation to the German Energiewende energy sector, the market entrance of new incumbents such as Tesla who recently proposed to introduce free parking for e-vehicles in certain cities in Germany.

TESLA proposed to enter the German market without any legal support from the government or European Union citing technology as a key driver in convincing the consumer to pay a premium.

The adoption of plug-in electric vehicles in the Germany is actively supported by the German Federal Government. Under its National Platform for Electric Mobility, Chancellor Angela Merkel set the goal in 2010 to deploy one million electric vehicles on German roads by 2020. As of December 2016, a total of 74,754 plug-in electric cars have been registered in Germany since 2010.The country is the largest passenger car market in Europe, however ranks as the fifth largest plug-in market in Europe as of December 2016. About 80% of the plug-in electric cars registered in the country through September 2016 were registered since January 2014. As of November 2014, the country had 4,800 public charging stations

The European Energy Students Network (EESN) is the first and only youth-led organisation that brings together energy engineering, policy, business, and law students from top European universities with a 450+ network of young energy enthusiasts. Their goal is connecting future energy leaders now. We believe this can only be done by promoting the direct, personal interaction between them for exchanging ideas and forging lasting bonds with relevant actors.

Therefore, EESN organises an annual conference where students and young professionals from the different energy fields gather and interact with practitioners, academics, and policy makers. EESN grew out of an initiative at EPFL (Switzerland) that brought together 50 students from 9 European countries in May 2016 for the first EESN annual conference to find ways to make a difference. They envision a better-connected network of energy professionals who can catalyse progress to reach the world’s climate change and energy.