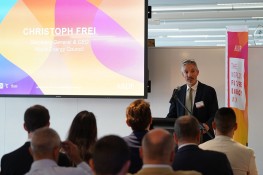 The Secretary General of the World Energy Council has landed in Australia as part of a week-long visit to Sydney and Canberra to meet with government ministers and leading business figures to discuss critical issues impacting the energy sector.

It is the first time Dr Christoph Frei has visited Australia as leader of the Council to discuss the economic and energy transition facing the country, as it looks to decarbonise its energy systems.

Later in the week Dr Frei will meet with Lily D'Ambrosio, Minister for Energy, Environment and Climate Change, in Sydney. He will also be participating in an Investors session hosted by JP Morgan and facilitating a round-table discussion at the Sydney Energy Leaders’ dialogue, held by EY – another Partner of the Council.

At a time when the Australian energy sector is undergoing a period of rapid change as part of the global energy landscape, the Council is focusing on the key drivers of a successful energy transition to ensure secure, affordable and more sustainable energy for all.

Likely discussion topics for the week include decarbonisation, decentralisation and a move towards prosumer and consumer power, enabled by new business models that have embraced digitalisation and energy blockchain. Australia’s blockchain scene is fast expanding, as organisations ranging from start-ups to the country’s largest banks and government agencies look to harness the technology. Blockchain is being tested in several energy-related industries in a country aspiring to become a global leader in the field.

Hydrogen has been identified as a huge opportunity for Australia, in a report produced by the Council's  German member committee, in collaboration with Frontier Economics last week. The are plans for the hydrogen economy having its first home in the Australian Capital Territory, with the government recently committing to a A$15M project renewable-energy powered hydrogen storage trial.

The Council recently held its 2018 World Energy Week in Milan on 8-11 October, which convened global energy leaders, government ministers and innovators. New technologies innovation, integration and sustainability of energy systems, were all high on the agenda.

Dr Frei will conclude his final leg of the Asia Pacific tour by leading on a session ‘The 3D vision – New Energy Perspectives', at the Asia Pacific Energy Leaders’ Summit, in Wellington, New Zealand, on 1 November.

You can watch an interview between Dr Frei and ABC News on the grand transition, 3Ds and current hot topics impacting the Australian energy landscape here:
[video width="1024" height="576" mp4="/assets/images/imported/2018/10/Arup20Sydney20ABC20TV20News.mp4"][/video]