< Back
The WEC’s 10-point agenda for change sets out a path to addressing the triple challenge of the energy trilemma.
COP-19, Warsaw, Poland, 16 November 2013 – A World Energy Council (WEC) report finds that the lack of a globally agreed framework for carbon pricing will impede investments from flowing into clean energy and low-carbon projects. 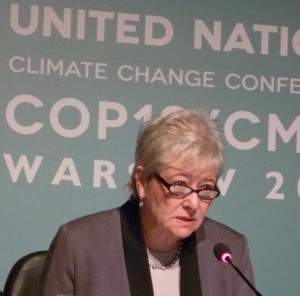 According to the report, “World Energy Trilemma: Time to get real – the agenda for change”, policymakers and industry must refocus their efforts on aligning their allocation of risks for energy projects in order for the finance community to be able to unlock investment.

The report spells out a 10-point action plan for leaders to create an energy policy framework that addresses the triple challenge of environmental sustainability, energy equity (access and pricing), and energy security: the energy trilemma.

Joan MacNaughton, Executive Chair of the WEC’s World Energy Trilemma study, said: “The current lack of a global carbon pricing framework is having a chilling effect on investment for clean energy and low-carbon infrastructure. Setting long-term, stable policies is crucial to unlocking the needed investments, and business must be part of the solution. Policymakers and industry must work together to reduce uncertainty and manage risk more effectively. Without a coherent and long-term carbon pricing framework we could be creating the next ‘too big to fail’ sector with current investments being stranded and an energy system locked into a high-carbon future. This is not what we want but delay will prolong uncertainty, leading to systemic risk for the sustainability of the world’s energy systems.”

The WEC report finds that capital is extremely sensitive to perceived political and regulatory risks. Moreover, the growing pressures on public finances in many countries mean that public funds will not be available to substitute or augment the private financing of energy initiatives. In a separate study, the WEC’s World Energy Scenarios estimates that the world will need to invest from US$19 trillion to over US$25 trillion for electricity generation alone, with the majority of investments required being directed towards solar PV, hydro and wind between now and 2050.

The recommendations in the report have been supported by Christiana Figueres, Executive Secretary of the UN Framework Convention on Climate Change (UNFCCC), who said: “The UN Intergovernmental Panel on Climate Change clearly sounded the alarm that greenhouse gas emissions will cause tremendous and irreversible harm to the economies of the world if not quickly curbed. The good news is that the money, technology and policy tools to shift the current emissions trajectory and steer humanity out of the danger zone are available. The Trilemma report demonstrates that a sustainable energy future is possible if all of these tools are deployed quickly and at scale. It also shows a strong willingness to act by the energy sector. I recommend that governments look closely at the report and act on its conclusions, which will strengthen the outcome of the 2015 global climate agreement and raise immediate ambition to curb greenhouse gases.”

To unlock energy investments, the WEC study calls for:
Joan MacNaughton concluded: “Without immediate concerted action between the public and private sectors, the prospect of sustainable energy systems will hang in the balance as we approach the 2015 negotiations deadline. For energy systems to be sustainable, countries must continue to work hard at identifying and implementing balanced and forward-looking policies. It is also necessary for the public and private sectors to proactively engage the finance community to drive the higher level of energy investments now required.”

The WEC’s 10-point action plan also recommends:
Watch the WEC’s press conference on this study on the UNFCCC website:

The “World Energy Trilemma: Time to get real – the agenda for change” report is the synthesis  of the findings of a two-year WEC study conducted with Oliver Wyman, the global management consulting firm. Its recommendations are the result of interviews with over 100 energy leaders in 41 countries, including chief executives, ministers, and heads of development banks.

The WEC’s recommendations build on the results of its 2013 Energy Sustainability Index, the world’s most comprehensive ranking of countries on their energy and climate policies as measured by their performance on the three aspects of the energy trilemma.

The Index finds that developed countries (such as Switzerland, Denmark and Sweden) with higher shares of energy from low- and zero-carbon sources supported by well-established energy-efficiency programmes outperform most countries.

However, all countries still struggle to balance all three aspects of the energy trilemma. According to the Index, only 5 countries in the top 10 have been awarded an “AAA” score, with Switzerland, Denmark and Sweden, the United Kingdom, and Spain on top of the WEC league table.

The Energy Sustainability Index is based on an analysis of 60 data sets that were used to develop 23 indicators across 129 countries. The Index provides a comparative ranking and a ‘balance score’ for how countries manage the three core elements of sustainable energy systems – energy security, energy equity, and environmental sustainability. The ranking measures overall performance on the Index while the balance score – for the first time – highlights how well a country manages the trade-offs between the three dimensions.

The report – The Energy Trilemma: Time to get real – the agenda for change” and the Energy Sustainability Index are available to download at www.worldenergy.org/publications