Energy Day 2019 points the way to a climate-neutral future

On 7 November 2019, the World Energy Council Germany (WEC), with its international experts, explored the question of how Europe and the world can shape a defossilised energy system. Is Power- to-X a key technological driver of this transformation? Is the hydrogen economy a national or international solution? Do we need new solutions beyond CO2 pricing and negative emissions to counter climate change? Approximately 200 guests contributed their assessments using real-time surveys. 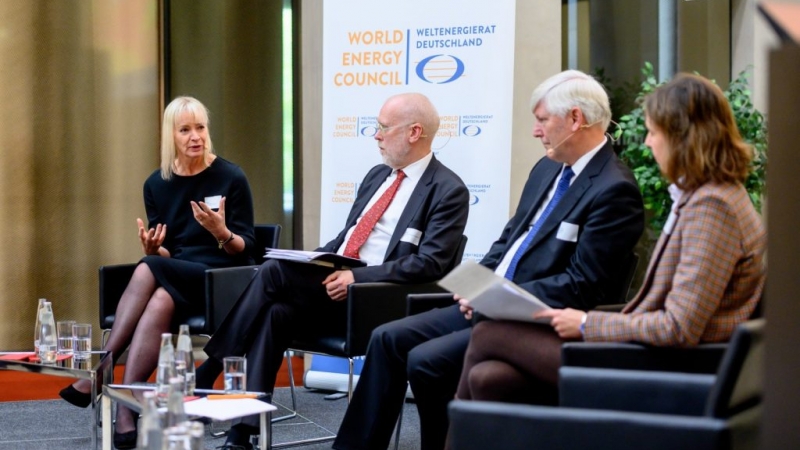 In his welcoming speech, WEC President Uwe Franke warned that the energy system transformation had to be shaped in terms of competitiveness and social justice and that the greatest hurdles had yet to be overcome. "A CO2-neutral energy system of the future requires technological openness— careful consideration of options without ideology. It requires innovation, research and development as well as long-term human acceptance. Without acceptance, the energy revolution will fail," said Franke. There needs to be an open and transparent dialogue between all those involved, both nationally and with international partners. Germany and Europe should be the drivers of the energy transformation.

Angela Wilkinson, Secretary General of the World Energy Council in London, during her first week in office, presented the WEC’s energy transition toolkit, and outlined the current challenges of an energy transition. A new era is dawning - for herself as the first woman ever to lead the WEC, and for the energy sector. Digitisation, electrification, customer orientation and integrated energy system transformation are the buzzwords of the future. "The scenarios of the World Energy Council show systemic turning points: We need green molecules - and control of the recycling economy. However, none of our previous scenarios will achieve climate neutrality in the future," she summarized. There is not just one solution on the path to climate neutrality. The ideal energy mix varies for each country, but the goal of climate protection applies worldwide.

State Secretary for the Environment Jochen Flasbarth reported that Germany would probably miss its climate targets for 2020, but nevertheless already demonstrates a significant reduction in emissions. While worldwide progress is coming slowly, he called for optimism as no other country followed the US in withdrawing from the Paris Climate Agreement. Measures to reach climate targets must be intelligently designed so as not to endanger the industrial competitiveness of Germany and Europe. "Decarbonising Germany without green hydrogen is impossible," explained Flasbarth. A structural expansion of Germany's climate policy provides for an investment programme of 54 billion euros for the coming years. Together with the decision to phase out coal, this would provide a good framework for climate protection.

Matti Anttonen, State Secretary for Finland's Ministry of Foreign Affairs, explained that the Nordic states are just as closely connected on the energy market as they are in the Nordic Embassies in Berlin. Finland imports a third of its energy needs from neighbouring countries and has committed to climate neutrality by 2035. "This would make Finland one of the first, if not the first, of the industrialised countries to achieve this ambitious goal," he stressed. The phasing out of coal is scheduled for 2029, while the use of biofuels will gradually increase. Finland's EU Council Presidency is focused on the EU internal market, energy efficiency, electrification, and research and development. Anttonen sees the circular economy as the key topic of the future.

"Decarbonization and energy system transformation are politically set. We are no longer talking about if, but how," said RWE CEO Rolf Martin Schmitz. Combining climate protection and industrial growth is possible under three conditions. First, the energy supply should be secure, clean and affordable, even in 30 years' time. Second, the development of climate-neutral technologies must be driven forward now in order to be successful on the world markets. And third, as drivers of transformation, there must be companies that keep pace with global competition. "Global players are required," said Schmitz. Extensive decarbonization by 2050 across all sectors, is ambitious, but not impossible. The global capital market is not lacking in technology and financing for the necessary investments. What is needed is political and social support. 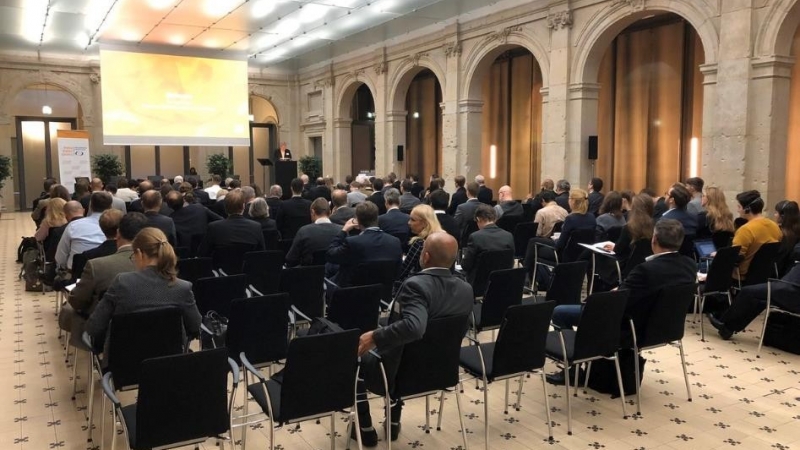 Wilkinson, Anttonen and Schmitz argued for integration at all levels, between all states and sectors, in their discussion on energy perspectives for Europe with moderator Sonja van Renssen. European energy companies are pioneers in climate protection thanks to the CO2 regulation via emissions trading. Blue and green hydrogen will play an important role in the future, as will strong planning of the energy infrastructure. The ever-stronger customer orientation will also change the future energy economy. Pragmatism and diversification are the top priorities. All options are on the table - now it is up to the market to set the decisive course for the future.

A live poll following the discussion showed that more than half of attendees believe that Europe will be completely or nearly climate neutral by 2050. The greatest challenge is believed to be the search for a common European strategy.

"Climate change is one of the more far- reaching social megatrends," said Karsten Sach, Head of the International Affairs, Europe, Climate Protection Department at the Ministry of the Environment, introducing his outlook for COP 25. The agenda of COP 25 will explore the extent to which man has intervened in the climate system, and stress a responsibility to stabilise it through decisive action. It will also deal with issues relating to the international market mechanism, the global profit and loss debate, which is not widely discussed in Germany, and the Gender Action Plan. COP 25 will take place from 2 to 13 December 2019 in Madrid, Spain, instead of Chile. 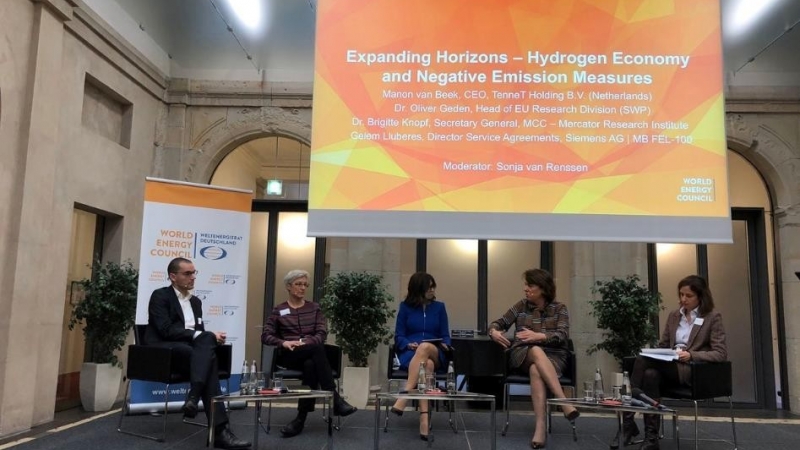 Kerstin Andreae, the newly appointed managing director of the Federal Association of Energy and Water Management, opened the discussion about global CO2 pricing. "A year ago, the introduction of CO2 pricing in the building and transportation sectors was almost unthinkable. A bill to that effect will be debated today and will be passed by the end of this year," she reported. CO2 pricing as a sensible climate protection instrument must create a level playing field between energy sources regarding tax burdens and levies. It should be implemented with as little administrative effort as possible, and the revenues returned to consumers as a means of garnering public support. A suitable instrument would be a reduction in electricity costs, in particular through a reduction in electricity tax. CO2 pricing should also be accompanied by a package of climate protection measures. CO2 pricing has been shown to influence declining emissions in the energy industry.

"The difference between a CO2 tax and a cap and trade system is not as great as it appears in the current debate," says Marc-Oliver Bettzüge, Director of the Institute of Energy Economics at the University Cologne. The decisive advantage is that the tax level or certificate price compensates for the marginal abatement costs between the economic players.

Differences between taxes and cap and trade result from implementation difficulties. Policy makers should carefully assess and understand marginal abatement costs and investment risk. A hybrid model combines cap and trade with a price corridor. More important than the choice of instrument, however, is the choice of policy objective: prices may be better suited than volumes.

In the subsequent discussion between the two previous speakers, both agreed that one sector alone cannot achieve climate protection targets. They also said the transport sector urgently needs to reduce its emissions. The entry-level price of 10 euros per tonne of CO2 has hardly any steering effect. "The decisive factor, however, is not the level of the initial price, but the signal that the CO2 price will rise," said Bettzüge. With a CO2 price of 65 euros per ton, 20 million tons of CO2 could be saved by 2030, Andreae calculates. The resistance of the population to CO2 pricing should also not be underestimated. The discussion was moderated by World Energy Council Germany Managing Director Carsten Rolle. 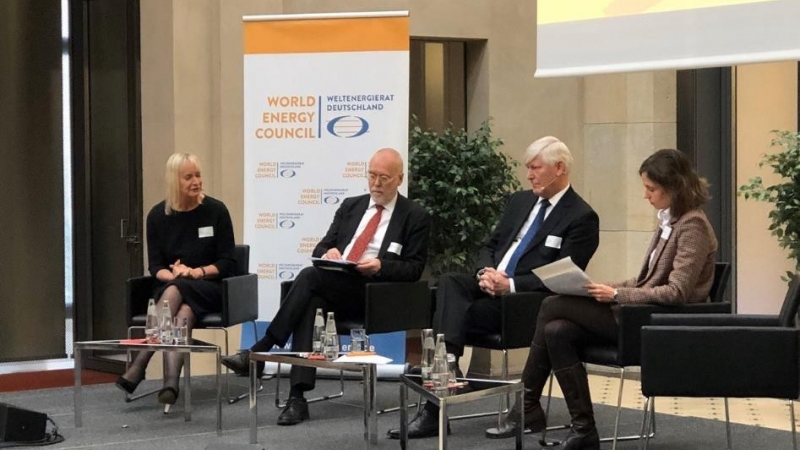 The day ended with a discussion on the hydrogen economy and measures to achieve negative emissions, moderated by Sonja van Renssen. Discussion topics included green and blue hydrogen, Power-to-X, market forces, sector coupling and Germany as a driver of a European energy system transformation.

TenneT CEO Manon van Beek called for rapid action and investments in electrification, conversion and storage technologies. "We need to find an answer to the demand for renewable production. We need seasonal storage like hydrogen," she said. Hydrogen could play an important role within a sustainable, affordable and reliable energy system. Tomorrow's infrastructure must be planned today. Ultimately, political courage is needed to push ahead with the energy revolution and find answers to the ambitious goals of the Paris Climate Agreement.

Oliver Geden, Research Group Leader Europe at the Stiftung Wissenschaft und Politik, illustrated the need to eliminate carbon dioxide in order to achieve net zero emissions. "A reduction in emissions alone will not be enough to achieve the climate targets, because residual emissions cannot be avoided," said Geden. He added that some companies, sectors or countries would have to produce net negative emissions in order to compensate for those who fail to eliminate emissions.

MCC Secretary General Brigitte Knopf sees a hydrogen strategy used hand-in-hand with renewable energies, but it would require a high CO2 price of 200 - 400 Euro per ton. "Reducing emissions will be the first priority, but carbon removal will be necessary," she explained. Technologies and processes such as CCS, direct air capture, afforestation, sea fertilization and the use of biochar and bioenergy will be possible.

"One billion people still have no access to energy," says Gelem Lluberes of Siemens AG - an aspect that should not be forgotten in the current discussion about the design of the future energy system.

Three strategies should be pursued simultaneously: increasing efficiency, fuel shift, and deep decarbonization. The necessary technologies are available—the world should now find a way to use them efficiently and to the advantage of all.

In the final audience survey, hydrogen was considered the issue most likely to shape the climate debate, followed by access to energy and affordability, climate change adaptation and negative emissions.

The next Energy Day will take place in November 2020 in Berlin.