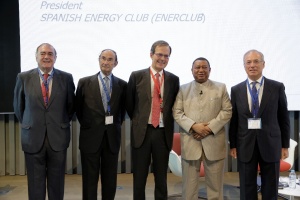 The Spanish Committee of the World Energy Council (CECME), held  its annual meeting, Energy Futures: The Middle East and Regional Energy Transitions, organised by the Spanish Energy Club (ENERCLUB), with the collaboration of the Royal Institute Elcano and the sponsorship of Cepsa.

Pedro Miró, Vice President and CEO of Cepsa, indicated that the Spanish energy industry is fully committed to environmental and socioeconomic sustainability.
"We have contributed a lot to development and we will continue to do so in the future, understanding that, in countries like ours, the weight of the industrial sector strengthens our economy and gives us greater capacity to resist economic crises. We share, therefore, the desire of the European Commission to increase its weight within European GDP to the target of 20%, he commented.”
Miguel Antoñanzas, President of Enerclub and Emilio Lamo de Espinosa, President of the Elcano Royal Institute said:
"The objective towards a new energy model less emitter is clear, the complicated thing is to know at what pace to achieve it, how to combine it with universal access to energy for the entire world population (7th objective of the SDGs) and how to do it in the most efficient and fairest way for all. It will be very important to keep a close eye on how energy transitions are evolving in different regions and countries. Only with responsibility and action from all parts we will be able to achieve the objectives in this global commitment of humanity ".
Emilio Lamo de Espinosa, highlighted the acceleration of geopolitical events in the Middle East region: the blockade of Qatar, the entrenchment of the war in Yemen, almost daily tensions in Syria, decisions with strong destabilising potential adopted by the Trump administration and a more assertive attitude of Russia and Turkey in the region.
During the plenary session, HE Mohammad Sanusi Barkindo, Secretary General of OPEC, and Iñigo Díaz de Espada, President of CECME, discussed the main challenges imapcting the energy sector globally. In his speech, Mr Barkindo highlighted the role of oil in the energy transition, its main challenges in the different markets; the position of the petrochemical sector in the future demand for oil; the impact of electric vehicles; future investments in oil and gas; digitalisation ('Big Data') and its impact on the oil industry.

"The world is going to need more and more energy," he said.  According to the latest OPEC report on the oil prospects in the short and medium term, in 2040 the world economy will increase 200% over the values ​​of 2017. At that time, the population will grow by more than 1.2 billion people, without forgetting, that a part of the population still lives in a situation of energy poverty. "Access to energy is not a luxury, it's a necessity," said Barkindo. The demand for energy will grow by 33% in 2040, motivated, above all, by emerging countries.”
He added: “It is not about choosing an energy source and eliminating the others, all will increase in the coming decades, with the exception of coal. Renewable energies, especially solar and wind, will have the highest growth rates (+ 7.4% year between 2015 and 2040). In 2040, renewables will represent 25% of the energy mix, where gas and oil will remain fundamental. The demand for oil will increase by 14.5 million barrels per day between 2015 and 2040."
In transportation, demand will continue to grow, despite the growth in electric vehicles, which will have a presence of 13% of the total fleet of vehicles in 2040, compared to the current scarce 1%. "Conventional vehicles will remain majority, but we must improve their efficiency," he said.

The demand for petroleum in the petrochemical sector will also increase at a faster rate than in transport, mainly by developing countries, Asia and OPEC countries. We will have to make large investments to meet this growth in demand. "The stability of the markets is fundamental to have the necessary investments that guarantee security of supply," he stressed.

On the climate  change challenge, Barkindo explained: "the problem is emissions from energy sources such as gas or oil. The solution lies in the technologies, not in the elimination of these sources.” He advocated non-discriminatory energy policies to respond to the growth of demand in a sustainable manner.

“The word cooperation is key at this time. It helps to stabilise the oil market. Dialogue is crucial to find realistic solutions. The future of energy goes through all sources. Oil and gas will cover 50% of energy needs in 2040.”

National and international expert speakers from various fields, such as academia, political, geopolitical, economics, and business took part in two roundtables during the meeting,  which focused on the geopolitical perspectives in the Middle East and North Africa, and the energy transition in different regions of the world.
The first round table, titled “Middle East and North Africa Geopolitics” focused on the three key players for the evolution of the Middle East and North Africa;  Iran, Turkey and Algeria:
“Regional Energy transitions” was the subject of the second roundtable. The purpose was to explore how regions around the world are adopting the low carbon transition, but at different rates and for various reasons. The European Union, USA and Latin America regions were covered.