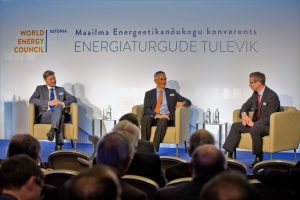 The World Energy Council and some of Estonia’s and Nordic key energy players convened to discuss what the future holds for global, European, and Estonian energy policy in the face of rapid innovation and other new realities facing the energy sector.

Dr Christoph Frei, Secretary General, World Energy Council, opened the conference with an overview of ‘The Grand Transition – Europe in the changing energy world’, and also joined Ando Leppiman, Undersecretary of Ministry of Economic Affairs, in a debate to explore ‘The grand transition of Estonian energy policy’.

Key discussion points centred on energy challenges during the upcoming Estonian presidency in the EU in the second half of 2017, in the context of the World Energy ‘hard rock’ Scenario, which explores the consequences of weaker and unsustainable economic growth with inward-looking policies; and illustrates a path defined by a fragmented world with low global cooperation.

The impact of the US election on Eesti Energia’ oil shale projects in America was also discussed.

US president-elect Donald Trump has said he would seek to make the US “energy independent”, and has proposed opening new areas of the country to oil and gas development in pursuit of that goal. The oil industry in the upper Midwest has taken a hard hit as global oil prices have dropped to between $40 and $20 a barrel over the last year in large part due to OPEC regulation. Trump  believes that U.S. oil production is key to the country’s energy independence.

In this context, what does the future hold for Estonian investment in oil shale at home and abroad? Eesti Energia, in Estonia is the world's largest producer of oil and electricity from oil shale and supplies 90 percent of the country's power. Enefit, the company’s international arm is currently pursuing what would be the United States' first commercial production of oil shale in a remote section of Utah. One of Trump's goals is to unlock more of America's vast shale resources, some of which are currently untapped because they are on federal lands, with the aim of drive demand for domestically produced energy.

Another key discussion during the session was Estonia’s position in the Council’s 2016 Trilemma Index.

According to the Council’s new World Energy Trilemma Index Estonia has improved by four places in this year’s Index, to rank 40. While it receives good scores in energy security and energy equity, its poor score in the environmental sustainability dimension results in an imbalanced trilemma performance, with a score of ABD.

Estonia has successfully improved its security of energy supply by diversifying its energy imports through greater interconnection with its Baltic and Nordic neighbours and increasing domestic electricity production capacity that exceed domestic demand. This export of power has also increased the emissions.

To remedy this, the government is now introducing a market premium model to support new renewable energy projects, while existing projects will benefit from the old feed-in tariffs until 2020. It was agreed that policymakers should focus on successfully implementing these tariff reforms and find other ways to increase the share of renewable energy to improve the environmental sustainability dimension of the trilemma and to decrease the effect that fluctuations in global oil prices have on energy security.

Planned new national energy strategy foresees the increase of the share renewables in final energy consumption from current 26% to nearly 50% already by 2030.

Meanwhile, the existing infrastructure will have to be rendered more resilient to cyberattacks and extreme weather events. Estonian experiences in cyber issues have provided a solid input in the transition towards smart grids: today all power customers have hourly metering available coupled with common data storage, and companies are serving customers with specialised applications.

The issue of stranded assets was also discussed. According to Dr Frei, changes in the way energy is being produced define a risk for existing assets to end up stranded. Oil will still be needed for transportation providing over 60% of energy needs but overall oil demand will flatten out. With stagnating growth potential in the oil sector and with coal likely to be of little importance by 2060, there will be a shift in the discussion from stranded assets (predominantly enterprise owned) to stranded resources in oil & coal (predominantly state owned). This has the potential to cause significant stress to the current global economic and geopolitical equilibrium and will need to be part of a broadened carbon and climate dialogue.

The impact of this trend on Estonia is two-fold: on one hand it puts oil-shale based industries and its resources under pressure; on the other, the Estonian government has made a strong push towards alternative energy uses in transport in order to reduce its dependence from imported transport fuels. Estonia today already features a network of loading stations for electric vehicles that covers whole country, with the share of electric vehicles total car fleet being among the highest in the world.
Christoph Frei commented: “There are new realities in energy and the possibility of stranded resources, sooner than expected peak energy demand and rapid innovation require to review yesterday’s strategies and policies. For Estonia the key questions are the future balanced investments in its oil shale and in renewables, while developing its leadership position on smart grid applications and cyber security.” 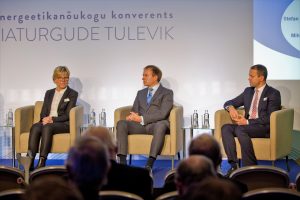 The second half of the day focused on the Nordic power market and addressed the questions of whether the energy market is sufficient to survive on its own, or is there a need for a separate capacity market? Vice President of Fortum Sweden Birgitta Resvik gave a speech on the most pressing issues facing the Nordic electricity market.

Hando Sutter, CEO of Eesti Energia; Ingrid Arus, NordPool Baltic Markets Manager; Dalius Misiunas, CEO of Lietuvos Energija; and Stefan Ulreich, Head of Political Affairs and Corporate Communications, E.On,  discussed the current challenges facing Nordic energy markets, as well as future scenarios.
Secretary General of World Energy Council Estonia, Mihkel Härm, said: “One of the biggest problems is that policymakers say they want free markets and that markets give us a fair price. The problem is that if the markets actually start to give us a fair price (high price when we run out of old generating capacity), the same  policymakers say that these high prices are not fair for the consumers and that price regulation is needed.”
There was a broad consensus that for the energy sector to work and society as whole is to let the markets work and to create a truly connected European market. Other key takeaways from the discussions included the call for more harmonised rules and regulations, enhanced physical interconnections and a greater willingness to trust and work with neighbouring states.