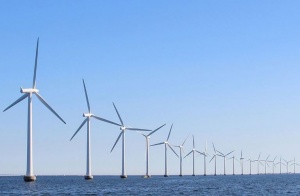 The North Sea will play a crucial role in the energy transition of North West Europe, once again, according to a new report by the Netherlands member committee of the World Energy Council.

The call for clean energy in Europe is increasing, and the North Sea will be crucial in the search for efficient routes that enable the large scale energy transition required to meet the Paris goals.
“Recently we have seen a great focus on offshore wind generation on the North Sea and capacity is rapidly increasing”, according to Jeroen van Hoof, Chair of the Netherlands member committee. “However, various pathways to bring the generated power to the end consumer efficiently now urgently need to be started. This urgency is driven not only by the timelines set out by the Paris Agreement, but also to address the system issues like storage requirements and how to enable the decarbonisation of the huge energy consumption of both Industry- and Transportation segment concentrated around our main ports. Thus ultimately, the success of offshore wind and other renewables on the North Sea, depends on this.”
The report ‘Bringing North Sea Energy Ashore Efficiently’ takes the rapidly increasing offshore wind capacity on the North Sea as a starting point.  Coupled with demand on shore, it shows that several solutions and technologies need to be developed in order to bring the energy to the end consumer in the most efficient way, and thus ultimately to the lowest cost to the consumer.

The study looks at two stylised pathways – the electrons (power) pathway and the molecules pathway, with a specific focus on H2 (Hydrogen) generation (power-to-gas). The study shows that a combination of both pathways will be needed if we are to meet the challenges of climate change in the future.  To create an affordable and reliable energy supply in North West Europe, a hybrid system of (green) power and (green) hydrogen is key.
“While the costs of energy in the North Sea are enormous, the financial and social returns on investment are also very large’, says chief economist Jan Willem Velthuijsen of PwC. “According to our modelling, the hydrogen future in 2030 would require capex investments in the order of €5-7.5 billion up to 2030 and in the order of €27-37 billion up to 2050. The majority of this investment is in electrolysis capacity. The resulting amount of energy would be sufficient to cover around 12.5% of the energy demand in North Sea countries’ industrial sectors in 2050.”
Compared to the current average CO2 emissions, such a shift to green hydrogen would represent approximately 32 megaton in CO2 savings annually when fully functional. Due to the large-scale nature of the investments needed, international cooperation will be necessary in order to make use of the full potential of the North Sea. Germany, the United Kingdom, the Netherlands, Belgium, Denmark and Norway feature centrally within the report.

Key findings from the report include:
Read the full report WEC brochure_Online offshore

RT @StartUpGET: Do you want to discover more about education and innovation? 💡Don’t miss out the session: The Future of the energy transiti…

RT @BBCStoryWorks: Generation Energy: meet the bright young pioneers exploring the potential of renewable energy sources around the globe a…