LNG as an opportunity for maritime transport in the Mediterranean Sea 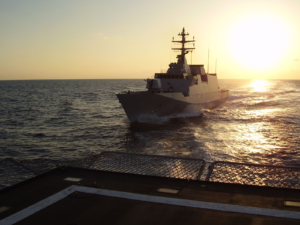 Operators and industry experts gathered at an event held by the World Energy Council’s Italian member committee to discuss the state of maritime uses and infrastructures for liquefied natural gas (LNG), with particular focus on the Strait of Sicily and Mediterranean region as part of the commitment of Italy to act as a hub for natural gas in the Euro-Mediterranean region.

The workshop, "Italy, the hub of natural gas: LNG as an opportunity for maritime transport in the Mediterranean, in close collaboration with ConferenzaGNL, was hosted by the Italian Navy in Augusta on 13 May. The event included two panel discussions in which representatives of prominent organisations in the industry presented their strategies to reduce the environmental impact of vessel traffic on the marine and coastal environment.

It has been estimated that, in the long term, the total potential use of LNG in Italy could equal almost 11% of its final energy consumptions. In this context, the Italian Navy, in collaboration with Warstila, is already working on the conversion of service vessels to LNG within the “Flotta Verde” (Green Fleet) Project. Moreover, by 2018, the private ferry boat company Caronte & Tourist, with its 14 ships for passenger transport in the Strait of Sicily, intends to have its first ship fueled by LNG, with the aim of increasing their numbers in the future.

LNG has been identified as a potential new maritime transportation fuel for the future not only for the port of Augusta but for Italy as a whole, because of its enhanced environmental performances and increasing competitiveness compared with traditional fuels. In addition, the decrease in the demand for traditional uses of natural gas (power, industry and commercial sectors), leaves more room for the direct use of methane in transport and off grid industries.

EU Member States are now being required to adopt national policies to facilitate the emergence of alternative fuels markets, with LNG becoming one of the main fuels promoted by the European Union for improving the security and diversification of energy supplies in Europe and the use of gas in non-traditional sectors, such as land and maritime transport through the direct use of LNG.

At the meeting it was announced that the European Commission is developing an EU strategy for LNG and gas storage, following on from the European Directive 2014/94/EU development of alternative fuels infrastructures for transport, in addition to the formulation of the Energy Union Package.
Speaking at the workshop, Mr Gilberto Dialuce from the Italian Ministry of Economic Development, said:
"In collaboration with the Ministry of Infrastructures and Transport and the Ministry of Environment we are currently finalising the draft of Legislative Decree implementing Directive 94/2014 which will be sent to the Council of Ministers by the end of May.

"This measure takes into account the development of the LNG market in the present year and the availability of this fuel, which predicts lower prices. We have included guidelines for the authorisation process in order to facilitate the development of new infrastructures such as small-scale LNG.”
Another key outcome from the the workshop was the recognition that after the recent Paris Agreement, natural gas and LNG in particular, is increasingly being acknowledged as the key transition fuel playing a crucial role in decarbonising the global energy sector. Its environmental performance aids the reduction of global (CO2) and local (sulfur, nitrogen, particulate matter) atmospheric pollutants, in line with the long-term environmental protection policies announced by major governments at the 21st Conference of the Parties (COP21) in Paris.

ConferenzaGNL is the biennial Conference on LNG for transport in Italy and in the Mediterranean area. The next conference will be held in the spring of 2017.