< Back
The global hydroelectric power market, which already represents 76% of all renewable global energy, has the potential to double to 2,000GW capacity by 2050 according to the World Energy Council Report  ‘Charting The Upsurge In Hydropower Development’ presented at the World Hydropower Congress in Beijing (19 May 2015).  This target could be achieved earlier than 2050, if governments and multilateral banks give help to emerging economies where hydropower resources are under-utilised and investors work with the sector to bring forward well-prepared projects. 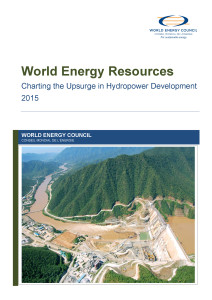 Since 2005, hydropower has seen a resurgence due to better management and understanding of what technology can provide.  It offers power and energy storage as well as the additional benefits of freshwater management, including flood protection and drought management.  With changing climates, the ability to store water and provide clean energy is key to developing economies in regions where new hydropower development has a major role to play.

The Report notes the change in approach to hydropower from the World Bank, private investors and NGOs such as the World Wildlife Fund and The Nature Conservancy who are now supporting hydropower schemes.  However, the Report says that there is much more that can be done to help developing countries.

Christoph Frei, Secretary General of the World Energy Council, said: “The future lies in the opening up of new markets through cross-border trade and power pools and devising appropriate market conditions, such as renewable incentives, clearer price signals for additional services and flexible generation.  Whilst some governments and multilateral banks are supporting and encouraging neighbouring nations to co-operate and share the same water resources, more innovative solutions are needed.”

The Report predicts that the regions where there is the highest potential for rapid growth are in China, India, Brazil and Southeast Asia. The schemes will be largely storage hydropower where water can be stored in reservoirs for additional purposes and run-of-river hydropower plants. These plants already exist in the Amazon basin, the Himalayas region and the Mekong and Irrawaddy river systems.

Speaking at the World Hydropower Congress, Marie-José Nadeau, Chair of the World Energy Council said:
“Hydropower consumes very little water compared with other energy resources.  As the world moves to cleaner energy resources and water becomes an increasingly valuable commodity in many regions, it will influence the choice of energy options.  Governments must take a leading role in addressing the vicious cycle of rising water and energy demands – the ‘energy-water nexus’.”

As the world increasingly turns to renewable energy, and if border tariffs come down, then hydropower utilisation will increase, not just to provide domestic energy, but also as an export revenue generator. Current examples of countries supplying its surplus energy to bordering countries include Canada to the United States and Norway to Denmark.

The Report was welcomed by Richard Taylor, Chief Executive of the International Hydropower Association, who said:
“We are pleased to have worked with the World Energy Council in preparing this Report.  The research shows that the hydropower sector is continuing to grow.  Large-scale projects will always be a challenge because there are so many authorities and stakeholders involved.  No projects move forward without the government concerned understanding hydropower.  It is their responsibility to create the right conditions to bring forward the best projects.  The spectrum of development models is increasing, and these will vary according to the local expertise and access to markets.  If hydropower’s contribution is to double, we need to share the knowledge that will lead to informed decisions that meet today’s sustainability criteria."

Hydropower’s flexibility of supply and ability to store energy until it is needed makes it an ideal partner to help other renewables optimise their contribution.  In addition, hydropower can also regulate river flows to manage floods or to mitigate drought periods – adding value to both our energy and water systems.

The World Energy Council 2015 Report ‘Charting The Upsurge In Hydropower Development’ covers technology and markets, the role of governments, sustainability and the future and includes contributions from: