< Back
30 November 2012 - Pierre Gadonneix, Chairman of the World Energy Council (WEC), has been presented with a lifetime achievement award at the 2012 Platts Global Energy Awards in New York. 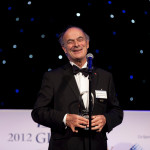 The award, in the Vision & Leadership category, recognises his extensive career in the energy sector. Pierre Gadonneix has served at CEO level in the gas and electric utility industries for more than 20 years and has also worked in the oil sector. He is currently Chairman of the World Energy Council, the United Nations accredited energy body representing all aspects of the global energy system. Pierre Gadonneix said:
"I am very honoured today to receive this prestigious award from Platts. Energy is fundamental to people's lives, their prosperity and the economic development of nations. However a lot remains to be done to deliver a sustainable energy future for the greatest benefit of all. This honour recognises my career to date and the role of French industry in the global energy market.

I pledge to continue to advance the work of the World Energy Council to build a consensus between our policymaker and industry communities to achieve a balance between the dimensions of the energy trilemma: social equity, energy security and the environment."
Pierre Gadonneix was appointed as WEC Chair in 2007 and has been involved with the WEC for almost 25 years. Prior to this appointment, he was Chair of the French Energy Council (CFE) and Vice-Chair in charge of the WEC in Europe.

He was named president and chief executive officer of Electricité de France (EDF) from 2004 to 2009, where he remains as Honorary Chairman. As Chairman and Chief Executive Officer of EDF he ensured the implementation of the Group's industrial plan, pursued its international expansion and opened its capital.

Prior to joining EDF, Pierre Gadonneix was Chairman and CEO of Gaz de France from 1996 after serving as CEO from 1987.

Earlier roles include Director of Metallurgica, Engineering and Electrical Industries at the French Ministry of Industry.

Pierre Gadonneix is a graduate of Ecole Polytechnique, and Ecole Nationale Supérieure du Pétrole et des Moteurs. He also has a doctorate from Harvard Business School. He is both a commander of the Légion d'Honneur and of the Ordre National du Mérite.

Pierre Gadonneix is Chairman of Latécoère's Supervisory Board, and chairman of Harvard Club of France, the club for Harvard alumni to connect in Paris and France.