Reform tops the agenda in Mexico 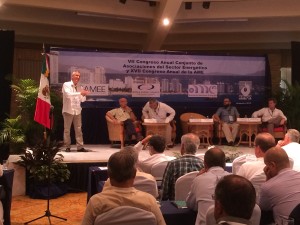 Against a background of energy change that is taking place in Mexico in terms of regulatory markets, low carbon economies and resilience strategies, Christoph Frei presented a speech at the VII joint annual congress of the energy sector associations in Acapulco, Mexico in September. In the speech he highlighted issues emerging from the World Energy Council’s Issues Monitor with a warning that if countries do not pay full attention to the balancing of energy security, energy equity and environmental aspects, energy markets will suffer.

At the Congress there were five sessions on key aspects of reform covering electrical systems and certificates for clean energy; the legal framework of the natural gas market; renewable energy exploration and production and the Energy Trilemma in competitive markets.  Over 180 delegates attended, including attendees from private companies already participating or considering participating in the new Mexican energy markets.

As is to be expected when a market is in its early stages of structural change, there were many questions about how the market will operate.  For example, in the first round of bids for the award of production sharing contracts for the exploration of hydrocarbons in shallow waters, there were 14 bids in the tender process, but only 2 were awarded.  There were also many questions relating to the opening of the new electricity market that is due to start operating at the beginning of 2106, and how clean energy certificates will be awarded.

Structural change and the move to a low carbon economy in Mexico provided the backdrop to Frei’s presentation in which he described a range of scenarios as well as dispelling some of the myths that currently circulate.

Mexico is undergoing a transition from high carbon, where the primary energy mix is approximately based on 90% of fossil resources, to a low carbon one.  In Mexico there is a very high interest in mitigating greenhouse gas emissions and, following the UK’s initiative to introduce greenhouse gas emission laws, Mexico is the second country in the world to introduce emissions legislation.

There was also discussion about how to take into account Mexico’s geographical position and its exposure to extreme weather.  Hurricanes can arrive from the east as well as from the west – and sometimes simultaneously.  Furthermore, Mexico is one of many Pacific-rim countries which experience seismic problems, as occurred recently in Chile. For these reasons weather resilience is very high on the Mexican agenda, and is being taken into consideration as the country develops it energy programme.