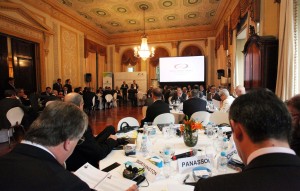 WEC’s third World Energy Leaders’ Summit (WELS) took place in Rio de Janeiro on Thursday 15th of September 2011.
Organised in partnership with WEC Brazilian Member Committee and supported by Eletrobras and Petrobras, the event saw Global Energy Leaders engaging in high-level dialogue on the current and emerging issues affecting the energy world under the theme: “2011, A Year of Change for the Energy Industry?”. 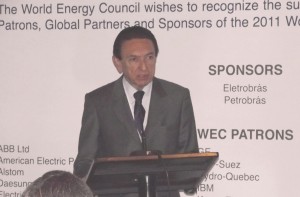 Nearly 100 energy leaders from over 26 countries, including Youcef Yousfi, the Algerian Minister of Energy and Mining, joined their Brazilian pairs during a series of round tables, held under “Chatham House rule” to encourage freer discussions and openness.

In his opening speech, Pierre Gadonneix welcomed the audience highlighting the importance of such meeting, in a time of ever changing context, to confront the fundamental long term challenges of the energy sector: energy security, climate protection and struggle against energy poverty, for the greatest benefit of all. Mr Gadonneix, invited energy leaders to observe the energy world, beyond the confusion of the daily news, and confirmed the need for the sector to create a governance system to pursue long term objectives and contribute to a global sustainable growth. He prompted each leader to play a key role in the dynamic process towards clear energy leadership: encouraging industry leaders to support governments while delivering growth and political leaders to deliver a clear framework for sustainable investment. 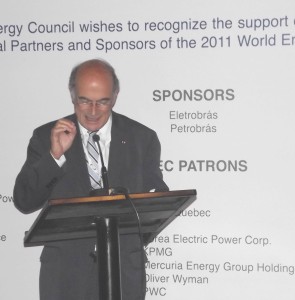 This dynamic process started with José da Costa Carvalho Neto, President and CEO of Eletrobras and José Sergio Gabrielli de Azevedo, President and CEO of Petrobras animating the plenary session debate around crucial questions such as: what will the implications of the Fukushima events be for the energy mix and global safety governance? How to accelerate international cooperation to overcome extreme energy poverty, especially in the context of 2012 International Year of Sustainable Energy for All?

The plenary was followed by thematic round tables focusing on key issues topping the current Global Energy Agenda. These started with the unveiling of the Potential provided by new supplies and the future of Unconventionals and Deep Water, led by influential energy players including Nemesio Fernández-Cuesta, Executive Vice President of Repsol Spain, and Marvin Odum, President of Shell Oil Company, USA.

Pierre Audinet, Senior Energy Economist at the World Bank and Manuel Ferreira De Oliveira, Vice Chairman and CEO of Portuguese Galp Energia, took part into the discussion about one of the greatest challenges in the next few decades in securing very high levels of investment: Policy Uncertainty: Challenging the Financing of Future Energy Infrastructure.

While Dean Oskvig, President and CEO of Black & Veatch Energy and Philippe Joubert from Alstom commented about what constitutes the potential new backbone for tomorrow’s energy solutions: Smart Grids: The Journey Begins.

A summary of the Outcomes of the Rio World Energy Leaders' Summit meeting are now available as a PDF report.

The next World Energy leaders’ event will be held in Istanbul, April 19-20, 2012 hosted by Turkey's Minister of Energy.