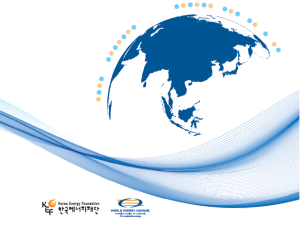 At the World Energy Council International Energy Symposium in Korea, where around 170 energy leaders from government, public authorities, research institutions and the industry met, there was a call to move forward the establishment of an alliance of expertise to meet the objectives of the Eurasian Energy Integration project.

The ultimate need for establishing an integrated energy market in Eurasia region has long been recognised by energy leaders and policy makers. Eurasia is home to resource-rich countries that are highly dependent on energy exports as well as major energy-consuming nations that are heavily reliant on energy imports.

Speakers from Korea, China, Russia, Europe and Japan addressed the Symposium with the vision and policy of their governments and industry in developing a Eurasian Energy Network. Among the many speakers were Chung, Yang-Ho, Deputy Minister for Energy and Resources of Ministry of Trade, Republic of Korea and Younghoon David Kim, Co-Chair World Energy Council Co-Chair, whose talks included the role of the Energy Trilemma in achieving Eurasian objectives.

Commenting on the Eurasian Energy Integration project, Chung, Yang-Ho, Deputy Minister for Energy and Resources of Ministry of Trade, Republic of Korea said that significant movement in global energy cooperation is required to break down barriers between energy consuming countries and energy producing countries in Eurasia region and ultimately to balance the World Energy Council’s Energy Trilemma.

Chung, Yang-Ho said, “We have to develop projects that are aimed at exploiting oil and gas resources of East Siberia led by a multilateral cooperation mechanism and create an environment to establish a cross-border energy infrastructure that includes a gas and oil pipeline and electrical grid.”

Younghoon David Kim, Co-Chair of the World Energy Council went on to emphasise the importance of leveraging innovative technological breakthroughs led by Northeast Asia as a core solution to overcome the challenges of the Energy Trilemma.

Younghoon said: “With the leadership in fields such as Energy Storage Systems from North East Asia and the rich hydrocarbon and renewable energy resources of the region, I know that Eurasia can stand at the forefront as a solution provider to overcome the Energy Trilemma throughout the world.”

Moderator Professor Yang Hoon Son showed regret about the absence of a specific action plan, despite the long continued debate about East Asian energy industry cooperation.  He said: "I feel regretful since despite that most of the world's industrialised regions are well cooperated in terms of energy, the East Asian region still does not have a concrete plan after 20 years of consideration.”

Park, Joo Heon, President of Korea Energy Economics Institution, explained that Korea can perform critical roles in the implementation of the Eurasia Initiative in both geopolitical and geo-economic aspects as it is located at a gateway that connects Eurasia and the Pacific.

He said, “Korea will enhance connectivity, which is a key factor in Eurasian cooperation, thus performing outstanding roles in expediting and facilitating cooperation in Eurasia.”