Small to medium reactors crucial to the future of nuclear 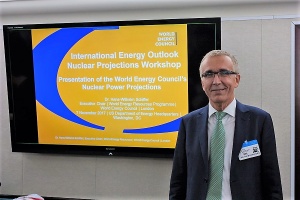 Dr Hans-Wilhelm Schiffer of the World Energy Council, presented the Council's Nuclear power projections at a workshop organised by the US Information Administration's (EIA) office of Electricity, Coal, Nuclear and Renewable analysis (ECNR).

In his presentation, which focused on the main findings of the Council's 2016 World Energy Resources report, Dr Schiffer stated that beyond the wider energy industry, the growth of the nuclear sector in China, India and Russia in particular, is seen as an important aspect of technological and industrial development.

The event, the ECNRA's first international nuclear workshop to address global nuclear power projections in support of the EIA's International Energy Outlook work, was an open forum to explore and debate issues impacting the nuclear sector from a global markets perspective.

Dr Schiffer argued that nuclear energy is a viable means in diversifying existing generating capacities, while limiting the growth of carbon emissions and securing power supply.

Development of  small to medium reactors (SMRs), is regarded as crucial to the future of the nuclear industry as it struggles to remain competitive against the rapidly falling cost of renewable wind and solar power.
Dr Schiffer commented:
"The Council's 2016 Resources report, which covers all energy sources, identified many future reactor technologies  which are at various stages of research and development. Of particular note are the class of small modular reactors (SMRs) which promise dramatic improvements in reactor flexibility and efficiency respectively – an important aspect in a future energy world with a dramatically increasing share of volatile renewable energies. Ranging in size anywhere up to about 300 MW, SMRs are designed to take advantage of economies of series production."
Dr Schiffer added, 'They have a greater degree of passive safety and are expected to have a wider range of applications than larger reactors, providing innovative solutions.'

In arid parts of the world, there are opportunities to use SMRs for desalination. Nuclear desalination has been demonstrated to be a viable option to meet the growing demand for potable water around the globe, provide hope to areas in arid and semi-arid zones that face acute water shortages.

The workshop convened  EIA analysts, representatives from small to medium enterprises as well international experts including: