The fifth edition of the 2018 Energy and Geostrategy publication was presented at an event held at the Repsol Campus. The new edition covers the central theme of the challenges and opportunities in governing climate change to implement the Paris Agreement.

It also focuses on geopolitics in four key areas: India, Russia, Turkey, and the Sahel. The first two, being two key nations with increased market expansion, with  Russia also being the world’s largest exporter of hydrocarbons. Turkey is covered from the perspective as a future energy hub, with the Sahel being seen as needing to create a framework of stability to develop a new energy outlook in the region.

The event held on 29 May, was organised by the Spanish member committee of the World Energy Council (CECME), the SpanishEnergy Club (ENERCLUB), and the Spanish Institute for Strategic Studies (IEEE) and was sponsored this year by Cepsa, Enagás and Repsol.

Repsol’s Chairman, Antonio Brufau, who opened the event,  gave an overview of the publication. He also talked about the geopolitical changes witnessed over the past year, which he said was dividing the world between globalisation and protectionism.

Miguel Ángel Ballesteros, director of the IEEE and General of the Artillery Brigade, then spoke of the importance of security of supply for a country like Spain which is dependent on energy resources. To achieve this, he said that it was essential to have public-private collaboration, as well as maximum support to design national security strategies.
Chairman of CECME, Íñigo Díaz de Espada, explained that the essence of the publication was to build a bridge between intelligence and geo-strategy network with the energy community, and analyse and give a broad overview of  both subjects in a global context. “Today the energy world cannot be understood without bearing in mind political, geographical factors as well as international relations. Similarly geopolitics cannot be viewed without consideration of the impact that energy has on it.”
Miguel Antoñanzas, Deputy Chairman of Enerclub, spoke of an ever more uncertain and complex geostrategic environment.
“With the entry of new players, new risks, and also new opportunities, it is important to understand what is happening to take the right decisions for our future.”
He also said that people are interested and concerned  about subjects such as safety and defense, climate change and energy prices that was once only the concern of experts.

Arturo Romaní, Under-Secretary for Defense, closed the opening session saying he was satisfied with the relationship between government services, the private sector, and international institutions. He also highlighted the importance of the publication at a time when risk and geopolitical uncertainty has increased over the past year. He mentioned the US withdrawal from the Paris Agreement and the Iranian nuclear agreement as main uncertainties, as well as “the importance of energy security, which must go hand in hand with environmental policies.” 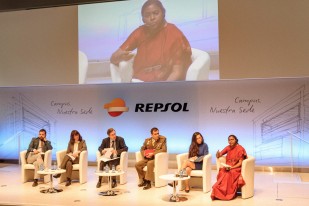 After the opening sessions, the authors of the study and its coordinator, former Industry and Energy Minister Claudio Aranzadi, analysed the subjects covered in this new edition.

The current edition of the publication also includes an interview with EU Climate Action and Energy Commissioner Miguel Arias Cañete, who talks about the top subjects in Europe’s energy agenda.

The event was closed by Mr Aranzadi and Mr Ballesteros, and moderated by Marta Camacho, head of Institutional Relations and Global Affairs for Repsol. She reflected on the main issues debated throughout the day. The results of a survey among participants at the event were also presented. 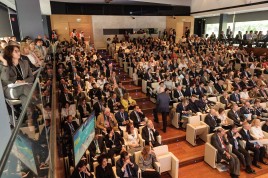 Over 80 per cent of the audience said their perception of geopolitical risks was higher than a year ago. Regarding the main consequences of the US backing out of the Iranian nuclear agreement were seen as increased confrontation in the Middle East, and a break down in trust between the US and EU. To a lesser extent, they also said that oil prices would rise, and that the US and Iran would renegotiate a wider scale pact covering missile development.
Click here to read the full book in Spanish.
Click here to read the full book in English.
Click here to watch all the sessions recorded.
Click here to watch the interviews with the Commissioner for Climate Action and Energy, Miguel Arias Cañete