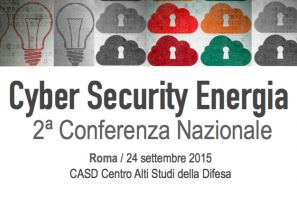 Against the background of the threat that comes from cyber crime, a partnership between the Italian member committee, Deloitte and Energia Media was formed in order to hold the 2nd National Conference on Energy Cyber Security in Rome. More than 100 representatives from international organisations, institutions, companies and universities attended.

The conference discussed strategy and future programmes and the defence of energy infrastructures in the Cyber space in the short and long term. One of the main speakers was Rita Forsi, Director General at Communications and Technology Institute, Ministry of Economic Development, a  major advocate and protagonist in the development of the first National Computer Emergency Response Team (CERT) in Italy.

The global energy sector is experiencing major change because of the threat that comes from cyber crime.  2014 was a year where investments in cyber security increased significantly - by 8% globally, despite the economic climate - but at the same time the number and seriousness of perceived attacks continued to increase.  Furthermore, these figures do not take into account that about two thirds of attacks are not even detected.

Notwithstanding all the work that has been done, and some significant results in the fight against cyber crime and cyber espionage, the lack of a comprehensive and shared strategy that faces up to this phenomenon was highlighted by several speakers.

Rita Forsi spoke at the meeting about her work in establishing the Italian CERT in June 2014.  This has become a structural part of the National Strategic Framework and of the National plan for the cyber protection and national IT security in Italy.

CERT supports citizens and companies by increasing awareness and safety culture in the use of online services, providing timely information about potential threats and recommendations and tips for the prevention and management of the response to cyber incidents which have an impact on a national level.  Rita presented the Italian experience, and underlined the importance of dialogue and exchange of information between international CERTs, an activity that has been underway since the constitution of the Italian team.

At the Second National Conference on Energy Cyber Security, there were also thematic roundtables where representatives from utilities and vendors debated threat intelligence, incident management and crisis management, focusing on the main issues that must be tackled to face cyber crime in a multi-utility and multi-business field.  Amongst the main messages emerging from the roundtables was the necessity to define stable and clear regulation measures, to increase the resilience of energy systems, to share information about experiences and technologies and to raise awareness on cyber security. The involvement of all the stakeholders active in the cyber space was considered crucial and imperative.

The Second National Conference on Energy Cyber Security is part of a programme that started with the First National Conference which was followed by specific workshops held in Milan and Rome. The programme aims to monitor and promote competences at both national and international levels and build a common working place.  To read papers and find out more visit cybersecurityenergia.it.