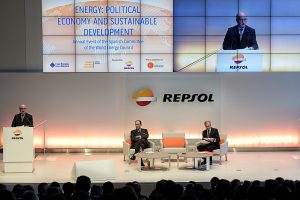 Over recent years, energy prices have played a key role in the development of political events.

In this context, this question was one of a number of key issues facing the international energy agenda discussed during the annual conference of the World Energy Council’s Spanish Committee.

At the conference entitled, ‘Energy: political economy and sustainable development’, held on 17 November in Madrid, the audience also had the chance to analyse the conclusions of the 23rd World Energy Congress, as well as the early findings of the 2017 World Energy Issues Monitor. More than 350 attendees and 25 national and international speakers from different companies and institutions participated.

Claudia Cronenbold, Vice Chair for the Latin American & Caribbean Region of the World Energy Council and Chair of the Board of the Bolivian Chamber of Hydrocarbons & Energy, presented the key messages of the Council’s recent report on World Energy Scenarios 2016: The Grand Transition.

After having defined the three exploratory scenarios developed in the study, Modern Jazz, Unfinished Symphony, and Hard Rock, that predict the probability of success in achieving sustainable economic growth, in the context of these Ms Cronenbold scenarios it would be difficult to achieve 2ºC warming goal. 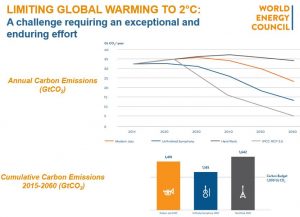 In the course of the debate Bassam Fattouh, Director of the Oxford Institute for Energy Studies, highlighted that due to low oil prices, companies do not have enough confidence to invest in oil producing countries. He pointed out that this scenario has generated a negative effect in these countries for the last two years, and forecasts that provisions for 2017 are not likely to improve.

The second round table, Energy in the Sustainable Development Goals, focused on SDG number 7. It aims to ensure access to affordable, reliable, sustainable and modern energy for all, with a clear mandate for development cooperation activities but also for infrastructure, technological and energetic policies.

The Sustainable Development Goals, ratified at the General Assembly of the United Nations, transcend the boundaries of the social aspects of human development and include many sorts of economic, political, institutional and social interlinked dimensions of development. This bolder vision of development and global governance takes into account, among other issues, the role of energy in development processes and strategies.

Moreover, several goals and targets affect the energy dimension as a result of the fusion between both the development and sustainability agendas, as well as the interconnections between goals and targets belonging to different dimensions.

This would be the case, of goals focused around responsible production and consumption, industry, innovation and infrastructure.

Speaking at the event, Scott Foster, Director of the Sustainable Energy Division at the United Nations Economic Commission for Europe (UNECE), emphasised that complete access to energy in 2040 is achievable, commenting: “We have to face the challenge of climate change in a really integrated way”.

Marta Camacho, Secretary General of the Spanish Committee, helped the audience interpret the early findings of the World Issues Monitor 2017, which is one of the key projects of the Committee’s annual working program.

Ms Camacho highlighted that there is a general consensus at a global level about certain issues placed on the top of many of the world’s energy leaders’ agenda, keeping them awake at night such as “Energy efficiency” or “Commodity prices”.

She also underlined a number of regional factors and additional issues which also define the impact and degree of uncertainty at a local level.

The event concluded with a joint discussion with Arturo Gonzalo, Chair of the World Energy Council,  Spanish  member committee,  jointly with Rafael Estrella, Deputy Chairman of Elcano Royal Institute, in which it was agreed that energy is cross section for all of the Sustainable Development Goals and is also placed at the heart of geopolitics.