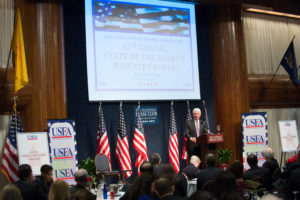 The United States Energy Association (USEA), our US member committee held its Annual State of the Energy Industry Forum, for the 12th year running.

Designed to coincide with the U.S. State of the Union Address, and widely regarded as one of USEA’s leading events, the forum held at the National Press Club in Washington, DC, brought together leading executives in the energy industry to exchange ideas and present information on major cross-cutting issues facing the energy industry in 2016.

Speakers addressed a variety of topics, including the creation of thousands of jobs for Americans in the natural gas industry; natural gas pipeline safety; the economic and environmental benefits of the shale revolution; the new era of LNG exports; and electricity providers working to build a modernized, strong, resilient power grid in the United States.