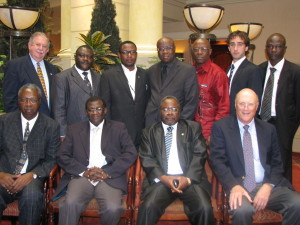 On 23rd February, SANEA, WEC'S South Africa Committee, hosted a workshop and Africa regional meeting. The workshop focused on the Energy and Climate Policy Assessment and also provided an opportunity to discuss WEC's other flagship, Energy Policy Scenarios to 2050 as well as topics of importance to the region, including energy equity and poverty, which WEC is partnering on with the World Economic Forum as part of the Energy Poverty Action (EPA) project.
Attendees also discussed WEC Africa priorities for the next cycle 2011 - 2013, strategies to strengthen WEC African MCs, a possible Africa Region Energy Leaders Summit in 2011, 2012 or 2013, Africa's views on on climate change and the new WEC Global Partners programme and its potential for African MCs. Attendees also heard a presentation on the 21st World Energy Congress to be held in Montréal.

The meeting attracted six WEC Member Committees from the region, as well as WEC London representatives.

WEC also partnered with Siyenza South Africa on the organization of the 2nd Annual INDABA Conference, "Energy 2010 - Solutions for Africa", which washeld at Sandton Convention Centre, Johannesburg, from 24-26 February. The Conference was chaired by our colleague Brian Statham, SANEA Chairman, and focused on the most important issues for the African energy sector, including energy access, infrastructure development, human capital development, climate change, finance and risk, legal and risk management and technologies, among others.