< Back
The World Energy Council and the Daegu 2013 Organising Committee signalled the beginning of the one-year countdown to the 22nd World Energy Congress with events in South Korea last week (11–12 October). 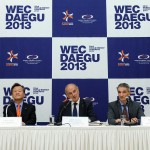 The events included a “World Energy Leaders’ Night” in Seoul attended by the Ministry of Knowledge Economy, senior officials, foreign ambassadors, and CEOs of energy businesses, plus the 3rd International Energy Symposium in Daegu where the WEC and local government leaders discussed the path towards sustainable development amidst the rapid growth of Asian energy industries.

At a press conference in Seoul, WEC Chairman Pierre Gadonneix and Secretary General Christoph Frei spoke to more than 30 journalists with the Organising Committee’s Chairman Kim Joong-Kyum and Secretary General Lee Jong-ho (pictured).  Mr Gadonneix and Dr Frei briefed journalists on what they should expect from next year’s Congress and outlined the energy trilemma, which is informing the Congress’ official theme: “Securing Tomorrow’s Energy Today”.

The energy trilemma – covering the delivery of secure, affordable, and environmentally safe energy – supports recent comments from United Nations Secretary General Ban Ki-Moon. In a meeting with Mr Kim Joong-Kyum in August, Mr Ban described energy as “the golden thread running through the UN’s Millennium Goals” and therefore sets the scene for further high-profile debates at the World Energy Congress next year.

WEC Chairman Mr Gadonneix said in a press statement: “Our 2013 World Energy Congress in Daegu, taking place as world leaders deliberate over the successor to the Millennium Development Goals post-2015, will offer a timely opportunity to focus on the energy trilemma and to measure the world’s progress towards a more sustainable energy future.” He continued: “The Congress will build on the World Energy Council’s insights and studies on energy resources and technologies, policies, and scenarios.”

To support the Congress the WEC used the milestone events to launch the latest World Energy Perspectives report, “Smart Grids: best practice fundamentals for a modern energy systems”, which includes a profile of the Jeju Island test-bed in Korea, currently the world’s largest smart grids demonstration project covering more than 6000 homes.  The report also highlights the regulatory and financing support that have enabled smart grids to optimise existing network infrastructure, citing the Korean example and other projects in India, Japan, China, Brazil, Europe and the US.

The World Energy Council carried out the smart grids study to identify the core drivers behind smart grids in order to speed up their uptake.  In the report the WEC also suggested that smart grids can help countries balance the three dimensions of their energy trilemma.

■ Further details on the one-year countdown commemorations can be found on the 2013 World Energy Congress website.