< Back
Energy and LNG experts gathered in Tokyo last month (16 October) to discuss the outlook of the world energy market and the safe operation of the LNG supply chain, at a symposium organised by the Japan Energy Association (JEA), the WEC’s Japanese Member Committee.
Japan has more than four decades of experience importing LNG and operating the LNG supply chain.  It is also the world’s largest LNG importer.  After the Fukushima accident last year, LNG has been highlighted as a key alternative for meeting Japan’s energy needs. As at January 2012, Japan’s imports of LNG were up by 28% over the previous year.

Dr Karl Rose, WEC Director of Policies and Scenarios, said that Japan will continue to import significant amounts of LNG, and this trend could strengthen even more due to the country’s decision to exit nuclear.

He cautioned that countries that have decided to phase out existing nuclear capacity will have to find ways to replace the energy shortfall without compromising affordable energy access, energy security and environmental sustainability.

“Japan has already shown that it can replace the amount of nuclear energy in the system, but the question remains if this provides a balanced energy trilemma for the country,” he added.

Dr Rose advised the Japanese sector to carefully monitor and draw lessons from developments in Germany, which decided to phase out nuclear power two months after Fukushima.

He said: “The German government is forced to correct some of the more over-optimistic assumptions about the rapid deployment of renewables on a large scale, and the costs of the energy transition [to renewables] have been grossly underestimated.”

Globally, amidst rising energy demand and increases in the use of coal particularly in China and India, the energy sector must consider nuclear energy and CCS technology if it is to achieve climate targets. “Without the use of nuclear energy, global climate and emission targets [will] become almost impossible to achieve,” Dr Rose said.

Dr Rose gave these comments in a keynote speech on the outlook of the world energy market at the symposium “World LNG Market”.  The symposium also looked at the potential impact of the North American shale gas revolution and the Arab Spring on the global and Japanese LNG market. 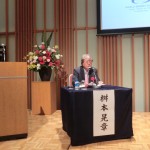 Mr Teruaki Matsumoto, Chair of WEC Japan
Other keynote speakers include Dr Ken Koyama, Managing Director of the Institute of Energy Economics of Japan, and Mr Takao Arai, Corporate Auditor of Fuji Oil Co. Ltd.  At the keynote speakers’ roundtable, they discussed the impacts of shale gas and LNG price mechanism with Mr Teruaki Masumoto, Chair of JEA and the WEC Japanese Committee, as moderator.

Mr Yutaka Kunigo, Senior Executive Officer of Tokyo Gas, described how diversification at various stages of the LNG supply chain can help ensure safer operation at the LNG receiving terminal.  These include diversifying and expanding the procurement chain, investing into upstream projects, taking direct ownership of LNG tankers, and constructing pipelines and receiving terminals based on advanced, safety-oriented design.

Mr Kunigo made the remarks at the session on the safe operation of the LNG supply chain.  At the same session other LNG experts, from Australia, Korea, and Japan, discussed engineering for risk mitigation, safety management systems, and prospects for gas-fired power in Korea and China. 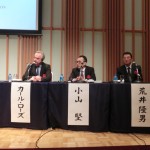 From left: Karl Rose, Ken Yoyama, and Takao Arari at the WEC Japan symposium on LNG
The symposium was organised by WEC Japan and co-hosted by WEC Japan’s Mr Teruaki Masumoto; Mr Jong Ho Lee, Secretary General of the Daegu 2013 Organizing Committee, and Mr Longxing Li, former Secretary General of the WEC Chinese Member Committee.  The event closed with a reception hosted by Mr Jong Ho Lee in celebration of the one-year countdown to the 2013 World Energy Congress.

Around 130 delegates from Japan’s energy sector attended the symposium.