< Back
The World Energy Council brought its content and thought-leadership to many of the more than 10,000 delegates at this year’s 20th Conference of the Parties meeting (COP 20) in Lima, Peru, where 195 countries were negotiating a global climate agreement under the United Nations Framework Convention on Climate Change (UNFCCC). 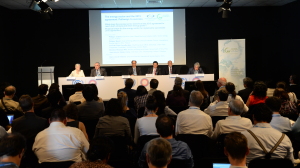 On 9 December the Council held an official side event in a packed room with the International Energy Agency (IEA). The event provided a forum to formally launch the Global Electricity Initiative’s (GEI) report following a brief press conference given by Philippe Joubert, GEI Executive Chair. The GEI report identifies the untapped opportunities for electricity utilities to further deliver a low-carbon future.

The side event panel discussion was moderated by Maria van der Hoeven, IEA Executive Director, who led a discussion with José da Costa Carvalho Neto, CEO of Brazil’s Eletrobras and Chair of the WEC Programme Committee; José Antonio Vargas Lleras, WEC Vice Chair for the Latin America and Caribbean region; Philippe Joubert, Executive Chair of the Global Electricity Initiative; and Philippe Benoit, Head of Energy Efficiency and Environment Division at the IEA. The Council was also honoured to have Eleodoro Mayorga Alba, Peru’s Minister of Energy and Mines at the discussion.

The panel discussion, entitled “The energy sector and the 2015 agreement: pathways to success”, mirrored many of the conclusions of the GEI and World Energy Trilemma reports. The meeting also highlighted the need for clear and consistent policies and the important role that regional interconnection can play in delivering more sustainable energy systems.

On the same evening the Chair of the WEC’s Peruvian member committee, Guillermo Castillo Justo, hosted a reception to mark the launch of the Global Electricity Initiative report. The event was attended by the Peruvian Vice Minister of Energy, Edwin Quintanilla Acosta.

On 10 December José da Costa Carvalho Neto and José Antonio Vargas Lleras both spoke at the UNEP’s Caring for Climate event and at the World Climate Summit, where they reminded the audience of the important role that the Council’s “energy trilemma” is playing in helping to guide policy in many counties. They also highlighted the findings of the new GEI report and role of interconnection in the Latin America and Caribbean region, building on the discussions at the Council’s Executive Assembly held in Cartagena, Colombia.

Stuart Neil, World Energy Council’s Senior Director of External Affairs, who was coordinating the Council’s participation at COP in support of the Global Frameworks Study Group, spoke at an International Chambers of Commerce breakfast meeting.

Summarising the Council’s activities at COP, Stuart Neil said:
“The climate negotiations, leading to a global agreement to be finalised in Paris next year, will have an important impact on the future of the energy sector. The insights that we brought to the talks were well received and I know that the conversations will continue.

“It was also good to see so many of our members who are actively supporting their governments in delivering a meaningful agreement. I am sure that the expertise the World Energy Council’s network provides will directly help to inform these talks through their important work,” he added.