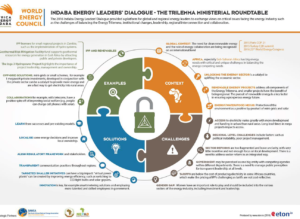 Following the series of regional workshops held throughout the world, the World Energy Scenarios work has finalised its consultative stage and is now entering a new major phase of its development work. Our project partner, Paul Scherrer Institute (PSI), is currently running the second Scenario quantification while the Scenario Study group continues to improve the global Scenario narratives which still include Jazz, and Symphony from our previous scenarios work and a third emerging scenario.

The World Energy Council has initiated an open, inclusive and transparent process to derive a set of energy scenarios to 2060. This is a sufficiently long period to see fundamental changes in the structure of the industry and the way it conducts itself. Our World Energy Scenarios will allow policymakers, energy leaders and investors to better understand and assess the key drivers that will shape the energy world of tomorrow in order to inform their decision making. This new flagship report of the World Energy Council will be revealed in Istanbul ahead of the 23rd World Energy Congress in October 2016.

The process to shape our scenarios includes a consultative bottom up approach including regional meetings to gather the views of energy leaders and practitioners across the world. Regional meetings were hosted in February in the margins of the Africa Energy Indaba by the Council’s South African member committee and in Paris on 10 March, hosted by the Conseil Français de L’Energie, our French member committee. Each workshop focused on specific regional insights and delivered very useful perspectives from the Sub Saharan and European region, which showcase the variety of challenges for energy policy makers – from energy access and financing energy projects to energy market designs

Africa is still facing the challenge of energy access for everybody, while strong population growth is projected until 2060. During the South African workshop in Johannesburg, it was agreed that developing relevant entrepreneurial and technical skills as well as fostering talent has to become a priority in order to address Africa’s energy issues. To overcome challenges and balance the energy trilemma, governments have to be careful with partial sector reforms and look at energy sector reforms in an integrated and holistic manner.

To achieve these energy trilemma goals, more policy efforts are required to overcome the urban bias in resource allocation and energy access. To extend energy access to rural areas, the opportunity of smaller scale off-grid renewables is a must. Mobile financing solutions are critical enablers for small rural projects. Cross-border energy flows from multi-national energy facilities will be essential for growth and development of African countries

Europe’s challenges are completely different. The lack of an established European electricity market with a strong growth of renewables generation is driving costs massively. However, what both regions have in common is that policy making is a key to reaching their objectives for a sustainable and also climate change policy aligned energy system.

At the Paris workshop the team welcomed presentations from Olivier Appert, Chair of the Conseil Français de l’Energie, Pierre Sigonney, Chief Economist of Total, Jean Paul Bouttes, Chief Economist of EDF and Stefan Ulreich, Political Affairs and Corporate Communications at E.ON. We received input and insights on how the electricity market should be shaped, how a Carbon market could look like in Europe and how the energy transition could be developed in Europe.

Our analysis also shows that the next five years will be important milestones for China. 2030 is a critical year for achieving energy demand and carbon emissions plateaus whilst by 2050 China is aiming to become a middle advanced energy economy.