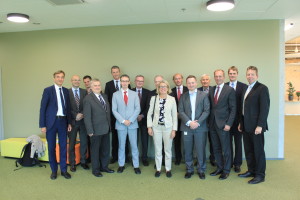 World Energy Council member committees from Finland, Sweden, Germany, Lithuania, Latvia, and Estonia who surround the Baltic Sea gathered in Tallinn for the 2nd annual WEC Baltic Sea Roundtable. They met to discuss the most topical issues for the energy sector, namely regional energy security and the competitiveness of European energy-intensive economy.

The 2nd WEC Baltic Sea Roundtable participants concluded that:
Energy security
Energy security is a term that almost everybody understands, but not nearly everyone can define. This fact and the troubles arising from it were voiced by the participants of the roundtable. There is no pan-European definition for energy security and this lack of a common understanding complicates cross-border cooperation which is urgently needed.

The need for closer cooperation is especially apparent in the power sector, which faces a number of problems. The most critical problem facing the power sector was deemed to be the lack of willingness to invest in new capacity. Investors regard the risks as too high and the returns as too low. Until now governments have relied on different support schemes for renewables to attract new investments into generating capacity, but this is not a sustainable solution.

The common view shared by many at the roundtable was that this ageing of generating capacity is a regional problem and it needs a regional solution. The regional solution could for example be a capacity mechanism or a price for capacity or some other market innovation, but the solution has to be European. One of the possible means for achieving this was thought to be the newly proposed Energy Union. The Energy Union could play a role in helping to better integrate European power networks.

According to a study carried out about by the German member committee of the World Energy Council, better integration of power networks has many positive results: reduced need for peak capacity; better reliability of wind power; more availability of systems to accommodate renewable and overall lower costs. The study also stressed that while in general it makes a lot of sense to have better integrated systems, each specific investment decision has to be further analysed, in order to compare the costs with the potential benefits.

The electricity sector is important, but so is natural gas, another topic that was covered at the meeting. Once again the conversations were about cross-border issues and market design. It was said that the keys to a regional gas market are the rules of natural gas transmission system and, most important of all, the Incukalns underground gas storage in Latvia. It was voiced by many that Estonia, Finland, Latvia, and Lithuania cannot have a common and functioning gas market without the market-based use of Incukalns gas storage.
Competitiveness
Energy policy consists of three dimensions: energy security, environmental sustainability, and competitiveness, or as the trilemma calls it, energy equity. These three are highly connected and changes in one have an effect on the other two. Achieving high competitiveness has a negative impact on the other two. Therefore it can be said that the goal should not be to have a very low price of energy, it should be to have an optimal price for energy.

This optimal price is very hard to find, currently prices for electricity in Europe are too low for investments into any generating capacity. The cheapest option in Northern Europe are new natural gas plants, for Southern Europe solar PV is already (almost) the cheapest option, but levelised costs for these new power plants are still about 10-15 EUR/MWh above the futures prices at power markets. To add to the worries of Europe, power is still more expensive in Europe that in Northern America.

Some countries have used different policy measures to keep their energy-intensive industries competitive with competitors outside of the EU. These measures include lower excise duty on electricity for large consumers, lower grid tariffs, exemption from the renewable surcharge and many more. The best example of a country doing this might be Germany, where despite all the exemptions, the price of electricity to large industrial consumers is still ca.25% more expensive than in the USA. Therefore, a lot of industries do not want to reinvest their capital into Germany, but prefer to move to the US. One of the worst examples might be Estonia, where no exceptions are used and where as a result the price of electricity for large consumers is more than 10 EUR/MWh higher than in its neighbouring countries.

Once again the solutions seem to be regional. The costs of having more renewables can be lowered by having cross-country subsidy schemes and ensuring that the renewables get built where it is most economical. For example, biomass is highly competitive in Northern-Europe, but much more expensive than solar in Southern Europe. Coordinated approaches can use these differences to minimise the costs to society.

Regional approaches are also more stable as national politics cannot change them so easily. Investors value this stability and as a result demand a lower risk premium, resulting in new investments and potentially lower prices.

Right now European industry should be thriving: the Euro is weak, interest rates are low and the wholesale price of electricity is at a multi-year low. The conditions seem to be right for the economy to flourish, but this is not the case. Policymakers need to anticipate that one of these factors might turn for the worse and they should be prepared for that. Having a contingency plan for dealing with energy security and unexpected changes in power prices is called for and should be a top priority.

A staggering 86% respondents of #WorldEnergyPulse, our survey of global energy leaders from nearly 90 countries, ag… twitter.com/i/web/status/1…

The warmth of #Mongolian homes: how affordable, energy efficient housing in the world's coldest capital is improvin… twitter.com/i/web/status/1…