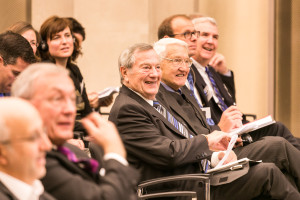 Energy Day in Berlin, organised by the German member committee in Berlin on 1 October in the historic building of the Brandenburg Academy of Sciences, drew around 220 energy experts from industry, academia and politics. Reflecting on current developments in the global energy world, there were two over-riding topics - climate protection via emission trading systems and decarbonisation against a background of low energy prices.

There was a keynote presentation from Roknoddin Javadi, Deputy Oil Minister of Iran, on how his country expects to position itself after the sanctions will be lifted early next year.  Roknoddin Javadi said that he expected oil prices to stay low for years to come, but recover in the mid-term as demand again increases.

Bonang Mohale, Vice Chair World Energy Council Africa and Chairman of Shell South Africa Energy  presented  ‘The road to resilience - managing and financing extreme weather risks’ report at the event, pointing out that extreme weather events have increased considerably over the past 20 years. He urged that investments in resilience measures are required now, not in the next decade.

Also speaking at the meeting was the Director General of the European Commission, Jos Delbeke, who was quite optimistic in his outlook for the COP21 in Paris in December.  60% of global greenhouse gas emissions have already been addressed by the INDCs (independent nationally determined contributions) received, and more INDCs are in preparation. However, even with these pledges, the 2°C target for global warming will not be reached, and so additional commitments will be necessary over the next years, he said.

Two members of the German parliament gave their political views on climate protection. First to speak was Annalena Baerbock, spokeswoman for climate policy for the Green Party, who acknowledged that climate protection requires a gigantic and strenuous effort, but however difficult, she felt that efforts had to be made in order to reach the 2°C target.  She wanted to see additional climate protection mechanisms, because the EU emissions trading scheme, ETS, is not working sufficiently well and will not lead to a 100% coverage by renewable energies which she would like to see.

Barbock’s talk was followed by Anja Weisgerber, Chairwoman of the Commission for Environment, Nature Conversation, Building and Nuclear Safety, who wanted Germany to be a pioneer, but that alone it could not save the world’s climate - other countries also had to commit to action.  To unleash the CO2 savings potential of climate friendly buildings, Weisgerber said she would give out tax incentives.

There was a refreshing perspective on the future of energy given by Pirjo Jantunen, Chair FEL-100 who felt that the generation currently in charge is the last generation that can do something about climate change. In her view, the key to future challenges is innovation.

The points made in the presentations were reflected on in two panel discussions.  In the first discussion Jos Delbeke discussed emission trading systems as the tool of choice for climate protection with Dirk Forrister, CEO of the International Emissions Trading Association, Christoph Sievering, Head of Strategic Energy Management of Covestro and Dirk Weinreich of the Federal Ministry for the Environment, Nature Conversation, Building and Nuclear Safety.  The discussion was quite controversial with a consensus that whilst there was a current situation with not every region having an emission trading system, that the differences between the regions needed to be compensated in order to avoid carbon leakage and an associated loss of jobs. When the panel was asked by the audience what would be a fair price for an allowance, the answer of the panellists ranged from “it should make the ETS meaningful” to “the price does not matter as long as we reach our targets”.

The second panel discussion dealt with decarbonisation against a background of low energy prices. There was agreement that the capital is available to invest in sustainable energy and innovation, but it needs to be directed into these fields. It was agreed that this could be done by tax incentives or tax penalties on a government level, or by ‘nudging’ and appealing to ethical behaviour on an individual level. However, hydrocarbon rich countries and companies that live on the exploration and production of fossil fuels will not, and cannot, give up their business models very quickly, especially considering a growing global energy demand.

The meeting concluded that the future development of climate change and severe weather events, as well as the negotiations at the COP21 in Paris and following COPs, will set the path for how quickly decarbonisation will progress in light of low fossil fuel prices.