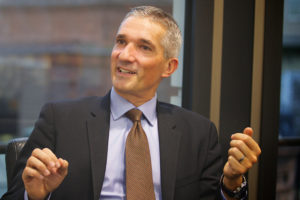 I wanted to personally thank you for your involvement and for the enthusiasm you put in all activities organised in 2016. This year has been very important and intense for the World Energy Council, and without your support and commitment we would have found it challenging, if not impossible, to accomplish all the achievements with our flagship reports, the Congress, and also the further expansion of our network in new countries.

Despite complexities such as the political situation and terrorism in Turkey in 2016, we delivered a safe and very successful 23rd World Energy Congress. We also witnessed history both in new content realities and in unprecedented participation levels… with four heads of state in attendance and helping to facilitate the warming of relations between Turkey and Russia during the Turkish Stream gas-pipeline signing ceremony on day one of Congress.

We managed to bring together a significant and diverse community of policymakers, energy ministers, academics, CEOs, young energy professionals and of course our member committees. The Congress has shown us the pieces of a future energy puzzle –  pieces that don’t quite fit yet but what made the Congress so special is that we had many of the jigsaw pieces there.

Firstly, despite the apparent democratisation or “depolitisation” of the energy sector led by digitalisation and decentralisation the Congress has shown us that the opposite is true: the fact that half of the world’s invested capital is in energy and that key geo-economic relations are directly based on energy makes an energy transition hugely political and geopolitical.

Secondly, it’s the first time we have referred to ‘peak demand’ and stranded resources – and we have done so with OPEC seating at the table. After Congress, OPEC began to refer to the possibility of peak demand in oil in the next decade – which truly is the start into a new energy reality.

Thirdly, only three years ago, when suggesting to energy professionals that there could be ‘leap frogging’ in energy similar to what has happened in the mobile phone industry, the response would have suggested little understanding of energy realities. We now see tens of thousands of direct household solutions being delivered to rural Africa without a formal supply chain and in the absence of any energy infrastructure backbone. What does leapfrogging mean, if not this?

Fourthly, resilience. As discussed at many of the high-level sessions on resilience at Congress, new physical, financial and virtual risks are posing ever greater threats to the energy sector. With participation from over 130 countries, the Congress has clearly illustrated that different risks and aspects of resilience have very distinct meaning and priorities in different regions. We are seeing deep regional variety.

Beyond Congress, 2016 has also been a very successful year for the Council.

We managed to launch a lot of powerful content including four of our flagship reports: 2016 World Energy Scenarios,  2016 World Energy Resources a new Trilemma Index, and the 2016 Issue Monitor, as well as our Road to Resilience work on Cyber Risks and Financing the Energy infrastructure. This is an opportunity to also thank our project partners for their great contributions: Swiss Re Corporate solutions and Marsh and MacLennan companies for resilience, Oliver Wyman for the Trilemma, as well as Accenture and the Paul Scherrer Institute for the scenarios.

It is clear from the research produced by the World Energy Council and the intense highest level dialogue held around the world that energy sector is undergoing a rapid grand transition. At our World Energy Scenarios to 2060 work and World Energy Issues Monitor have captured new realities. For the energy sector, unprecedented speed of change and new realities pose a wide range of challenges and new opportunities for companies and governments who are on a high-stakes journey to adapt their business models and policy frameworks.

On top of content, there was the expansion of our membership in Malaysia, Singapore and Mongolia as well as the roll out of the new World Energy Council branding.

As we enter 2017, as we undergo the grand energy transition we need to ask the question as an organisation how do we evolve, what does it mean for our network and content priorities? This question is driving our strategy review process and I want to thank all of these who have already contributed their thinking through participation in the MC survey, Secretaries strategy day workshop or interviews.

We will continue to take your input in the New Year and will be ready to share early thinking at our Standing Committee meetings in Malaysia in May 2017.

Once again, I want to express my gratitude for your collaboration, and I very much look forward to the many exciting engagement activities planned for 2017.