Shaping the future of energy in Latin America & The Caribbean

The Latin American regional network spans from Panama, Ecuador and Colombia in the North to Chile, Uruguay, and Argentina in the South, and includes further countries in central Latin America countries. The extensive network brings together the energy plus community in the region, including Ministers and government officials, CEOs, academics, energy experts, and young energy professionals to discuss and work for a sustainable energy future in the region.

Through events at regional and national level, the development of region-specific content and analysis, an extensive cross-border capacity building programme and collaboration with regional organizations such as the Development Bank of Latin America (CAF), Inter-American Development Bank (“IDB”) and Regional Energetic Integration Commission (CIER), national Member Committees work together to advance energy transition in Latin America and the Caribbean.

Regional action priorities that support the Council’s mission and humanising energy vision are agreed on an annual basis by national Member Committees in the framework of a Regional Action Plan. In 2021, Latin American members agreed to drive forward conversations on the future of hydrogen in the region, extend the reach of “We are all Energy” public awareness campaign across the region, and empower and connect young professionals to take an active role in the regional network.

Each month, the Latin American regional network meets to discuss matters of mutual interest, drive collective activities, and keep each other updated on relevant developments and events. In addition, throughout the year regionally targeted workshops are being organised to advance discussions in the context of our global insights and innovation tools.

Building on the 2020 interest of national Member Committees in the region and a Hydrogen Innovation Forum conducted, members in the region took forward the conversation on clean hydrogen as a promising solution to decarbonise hard to abate sectors such as industry and mobility while providing a seasonal storage solution. Key stakeholders engaged in discussions focussed on demand drivers and economics of hydrogen production and use as well as value chain developments, policy enablers and bottlenecks.

Initiated by the national Member Committee in Chile and the Chilean Agency of Energy Sustainability the “We are all Energy” campaign invites citizens to reflect on how energy, in all its forms, impacts people's life. Through a series of conversations supported by a social media campaign, “We are all Energy” raises public awareness about the role of energy as a key enabler to social and economic development, and the importance of advancing energy transition that leaves no one behind – now and for future generations. The initiative was extended to Argentina and Colombia who shared their local experiences and reflections around humanising energy transition.

Capacity building of professionals in the region has been a priority for national Member Committees for many years. World Energy Academy, a format initiated by the national Member Committee in Argentina (CACME) in 2014, provides professionals from different backgrounds with the tools to understand, assess and inform decisions, and exercise responsible leadership on energy issues. The World Energy Academy currently runs in Argentina, Bolivia, and Colombia.

National Member Committees across the region recognise the importance of empowering young professionals in the region to become actively engaged in and drive regional action priorities. Based on local vision and needs, Future Energy Leaders’ get involved through dedicated national programmes – in Panama, Chile, Argentina, and Uruguay – and / or in cross-border activities. At the same time, they have opportunity to network and interact with their peers and senior energy leaders.

Energy in Latin America and the Caribbean 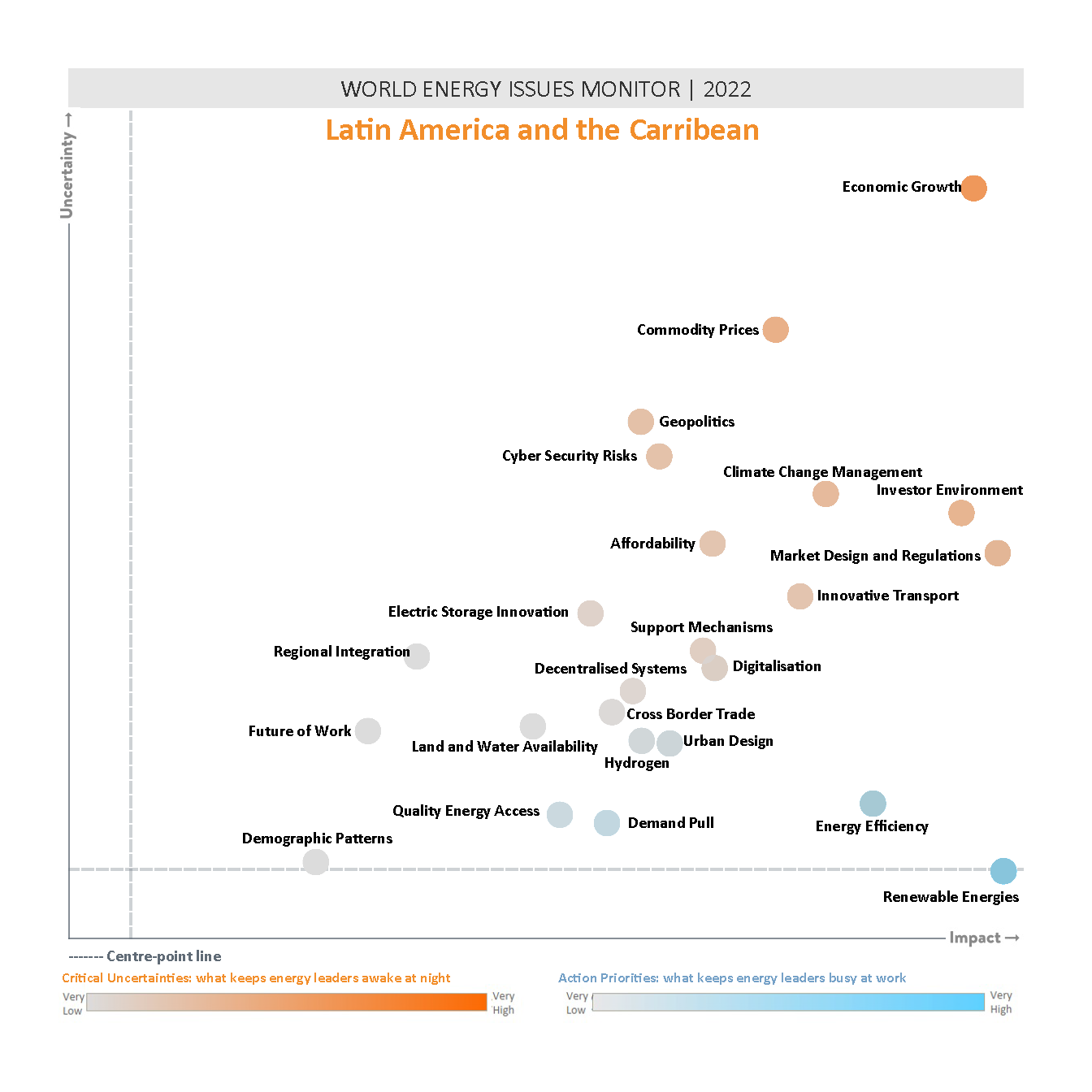 Showing analogous responses to Africa, the Latin America and Caribbean region reports clustering of all issues in the high impact area of the map, along with higher uncertainty. The map is striking in its depiction of no clear distinction of priorities. No issues fall into the Action Priorities quadrant.

This year’s Issues Map for the Latin American and Caribbean region must be framed in the context of the pandemic. Interamerican Development Bank (IDB) studies show that nearly 33% of all COVID-19 related deaths worldwide occurred in Latin America and the Caribbean, despite the region constituting only 8% of the total world population. In addition, it is estimated that more than 52 million people across the region dropped out of the previously growing middle-class sector in 2020, eroding years of work to grow this segment. Worse, 44 million people fell into poverty in the same year, threatening the future of an entire generation. In addition, more than 39 million jobs were estimated to be lost by 2020, worsening pre-pandemic stagnation and tearing at the social fabric of the region. The situation is further exacerbated by climate change – people on the lowest incomes are the most vulnerable to the impacts of drought, wildfires, sea-level rise and other extreme weather events. IDB estimated that the annual cost of climate-induced damage in the region by 2050, if global warming is not kept below 2̊C, will amount to $100 billion, threatening development gains post-pandemic and far into the future.

It is therefore unsurprising to see Economic Growth being deemed the highest Critical Uncertainty for the region, with Commodity Prices and Climate Change Management also keeping the region’s energy leaders awake at night.

The region has a major challenge in guaranteeing the availability of energy to meet demand, with affordable prices and quality, as well as ensuring basic energy access and supply for the entire population, particularly given the environmental challenges some countries are facing. In 2021, the Southern Cone, and Brazil in particular, faced the worst drought in a century, forcing a return to thermal power generation, with an impact on the emission of greenhouse gases. In addition, the worsening economic environment is creating a cost burden and rising inflation, which is significantly impacting the population, with disproportionate effects on the poorest citizens.

With respect to Climate Change Management, COP26 was perceived positively in the region, with targets deemed as being clearer. Almost 20 LAC countries signed up to the global methane-reduction agreement – The Global Methane Pledge. And Argentina, Colombia, Ecuador, Brazil, Chile, Honduras, Peru, Costa Rica, Guatemala, Cuba, Mexico, Panama, Paraguay and Uruguay committed, together with other countries at a global level, to reduce deforestation and land degradation by 2030. Most countries in the region increased their climate change ambition, but Brazil and Mexico, which together consume close to 50% of the region’s energy, were less ambitious in their Nationally Determined Contributions (NDCs).

The Challenge: Low economic growth and the lack of leadership clarity

From this year’s Issues Map, Economic Growth is clearly accorded the highest degree of uncertainty. Growth rates across the region are averaging between 2% and 6% which, in turn is generating additional uncertainty with respect to the economic stability of investments and availability of finance. Energy leaders agree that long-term vision, economic monitoring and forecasting are key to stable economic growth, and that job creation and investment need to be brought centre stage.

Social unrest in some countries and the growth of extreme right and left political wings are creating very large uncertainties in terms of political and economic issues, which impact energy policies. The general climate of uncertainty is impacting everyone, including the region’s research institutions.

Energy leaders agree that governments must consider long-term planning and include environmental targets as part of their plans for the region’s economic recovery.

The Opportunity: Transport and technology innovation

What are the opportunities across the region that can be turned into Action Priorities?

There is much discussion across the region about carbon neutral and net-zero scenarios, with up to 15 million net jobs forecasted to be created across the sector in the next decade. The region is very well positioned to take advantage of energy transition. It houses the world’s largest copper and lithium reserves, which are critical to electromobility and energy storage technologies, and is keen to take advantage of the associated innovation ecosystems that are being developed.

"The research and development priorities are the same for the whole world: we are on the way to look for integrated energy systems. It requires a more integrated approach through digital integration technologies and systems. We need to look at things holistically, comprehensively, unified. Efficient use of electrification, electric mobility, and artificial intelligence - this way we can be more efficient.

In addition, the region has an abundance of natural resources, particularly non-conventional renewable energy sources, that are available for exploitation and development.

"Latin America has enormous energy potential due to its abundance of natural resources, particularly in relation to non-conventional renewable energy sources, although historically, this potential has been underutilised.

Electromobility and the development of the green hydrogen economy with IDB support are also opportunities for the region and instrumental to energy transition. In Uruguay, transport accounts for two thirds of the country’s fuel requirements, so it is critical that it is addressed.

Regional energy leaders consider that Hydrogen should feature in the Action Priorities quadrant of the Issues Map. Mexico’s Federal Electricity Commission (CFE) has taken a lead in hydrogen and expects its green hydrogen plant to start producing clean fuel in 2023. Colombia and Chile are positioning themselves as potential large-scale producers of hydrogen, and Brazil is also expected to launch its hydrogen roadmap this year.

According to regional energy leaders, energy transition will require between three and five times the current level of investment, and needs the support of international agencies, as well as the ability to attract capital from the private sector, to be successful.

A high degree of investor uncertainty exists at present, which requires the introduction of regulation to support renewables and infrastructure projects to reduce uncertainty and perceived risk. Uruguay has launched the first sustainable bond for US$15 million and an award-winning certificate of origin of the energy they consume as a step in this direction.

The RELAC Initiative (energy compact to boost renewables in Latin America and the Caribbean, with 15 member countries across the region) has an objective of reaching at least 70% of renewable energy in the region’s electricity mix by 2030. The current contribution is 58%; the 10% increase required in the next 8 years implies a 15% reduction in emissions and will require long-term vision and increased cooperation to give more certainty to the growth of renewables.

Significant gains can be derived from energy diversification across the region, as well as enhanced cooperation and increased energy integration between countries. Reduction in costs is seen as a driver, along with enhanced energy security resulting from mitigation of the uneven fluctuations in costs and periodic scarcity of supply due to extreme weather (drought) of the region’s main energy resource – hydro. 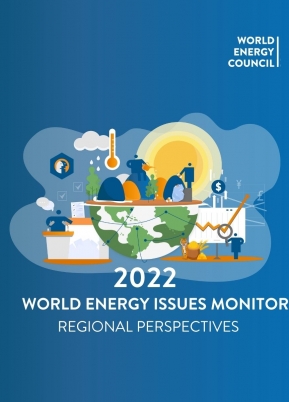